There’s never been a better time to be a foolish mortal. In case you missed it, Disney Parks made some spooktacular announcements today about their 2022 Disney Halloween events.

we got a shriek Peek at all the ways we can ring in Halfway to Halloween at the parks, on cruises, and at home. We also got some not-so-scary news about a beloved Parks party that hasn’t been celebrated since 2020.

You’ll be swept away to multiple Disney Parks for some bootiful surprises to get your bones chilled just in time for October 31. This will include some Hocus Pocus fun, so grab your pointiest hat and don’t miss it! 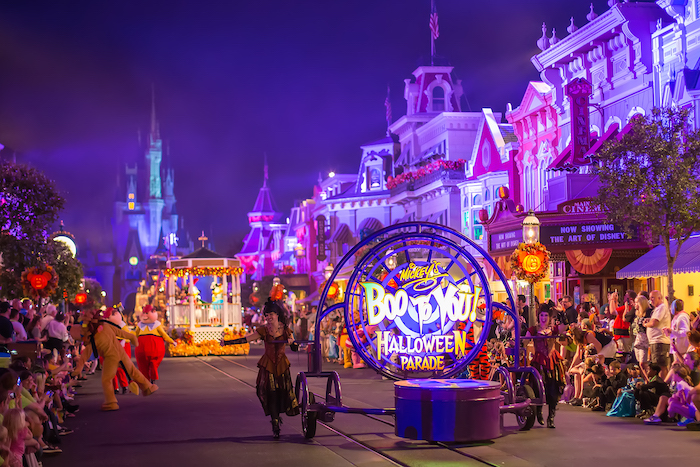 Is it possible we haven’t seen the last of the Boo To You Parade? Photo by Brett Svenson

Hold onto your Mickey Mouse Jack-o’-Lantern Ears. This is the BIG story coming out of the 2022 Disney Halloween events round-up.

As a real treat for all guests at Mickey’s Not So Scary Halloween Party, a Halloween-themed 50thAnniversary celebration commemorative print will be handed out!

Every Disney Parks fan remembers where they were they found out that Mickey’s Not-So-Scary Halloween Party had been canceled in 2020. It was news that was, indeed, scary. And sure. We had the After Hours BOO BASH last year, but we couldn’t help but wonder if our favorite must-scream event would ever come back. Well, fear no more. Mickey’s Not-So-Scary Halloween Party returns to Magic Kingdom this fall!

As a tie-in to the upcoming Disney+ release of Hocus Pocus 2, the Sanderson Sisters will be on hand to make some mischief. Could they be performing in a revival of the Hocus Pocus Villain Spelltacular? 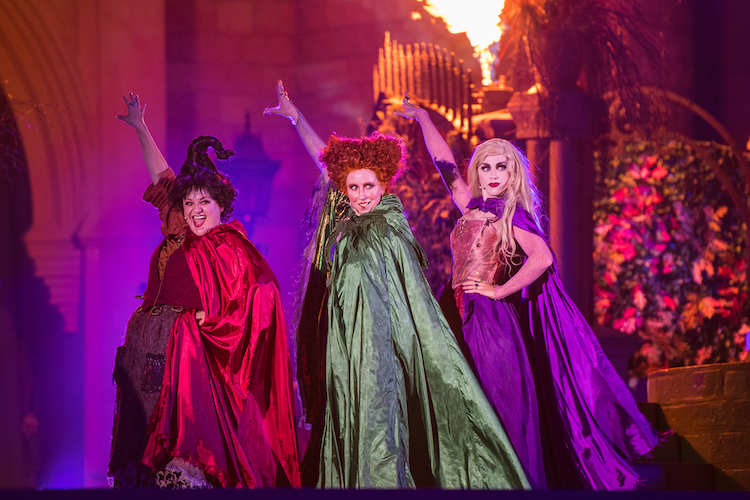 This is pretty huge news so, naturally, we have some questions.

🎃NEW🎃 Trick or treating will be back! Haunted Mansion graveyard gravediggers, special photo-ops, and exclusive entertainment are coming to Magic Kingdom!

Want Mickey’s Boo to You Halloween Parade be back too? We may not have all the details yet, but rest assured, this party is going to be a frightfully good time. 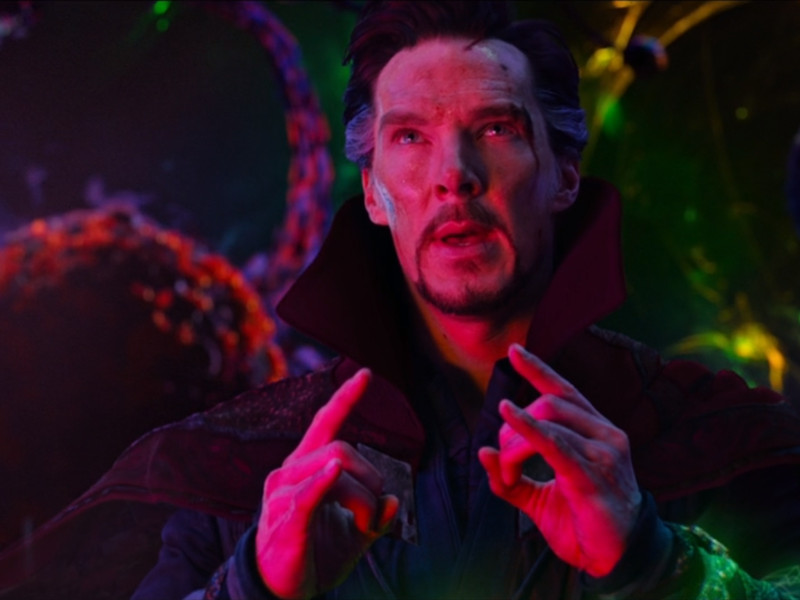 If you watched Marvel’s What if…? on Disney+, then you know things got pretty bad in the universe where Doctor Strange lost his heart instead of his hands.

Now, it looks like the multiverse is causing more than a little madness at Disney California Adventure too. Starting in May, “Dark Variants” of our favorite Marvel characters will descend upon Avengers Campus.

💥NEW💥 Scarlet Witch and America Chavez from the new film “Doctor Strange in the Multiverse of Madness” will make limited-time appearances in Avenger’s Campus!

As long as the Avengers zombies don’t show up, we should be safe… right? 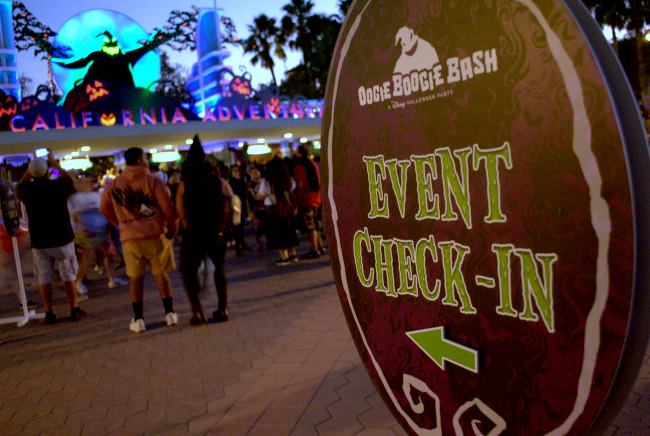 Oogie Boogie is back!

We don’t have dates yet, but the biggest Halloween bash on the West Coast has been confirmed! Stay tuned for updates, or peek at the Halloween snacks at Disneyland Resort here… 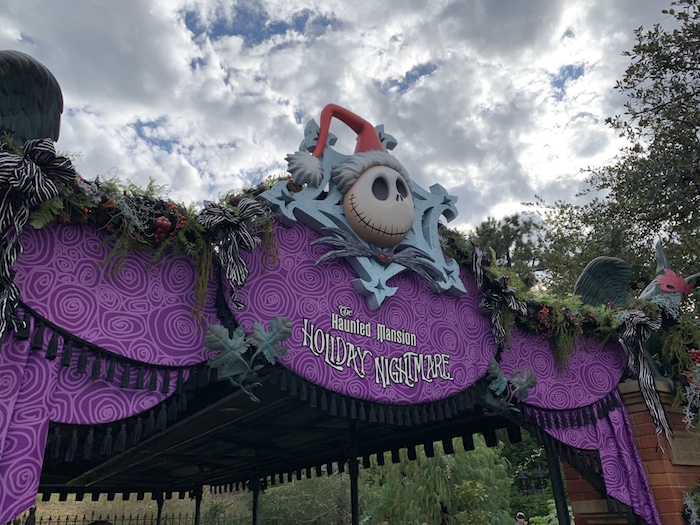 Nightmare Before Christmas overlay on The Haunted Mansion at Tokyo Disneyland! Photo by Stephanie Shuster.

“Disney Halloween” is slated to return to both parks this year. Could the Spooky “Boo!” Parade be next? We’ll keep you posted. 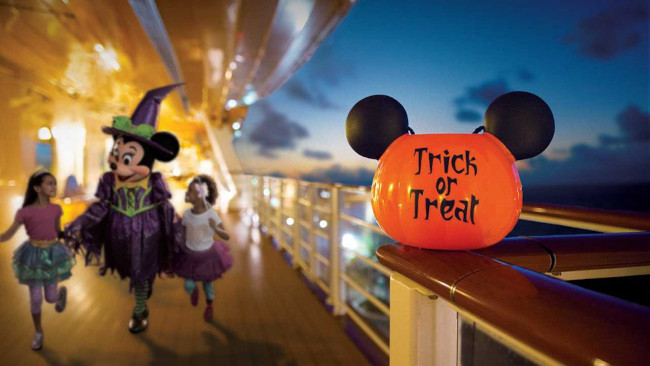 If you took Mickey’s Not-So-Scary Halloween Party, BOO BASH, and a Disney Cruise and Frankenstein-ed them togetheryou would get Halloween on the High Seas.

If you know, you know.

🎃NEW🎃 An all-new Pumpkin Tree will debut in the Cinderella-inspired Grand Hall of the Disney Wish.

Meanwhile, aboard the Disney Wisha Pumpkin Tree will be on display in the Grand Hall. 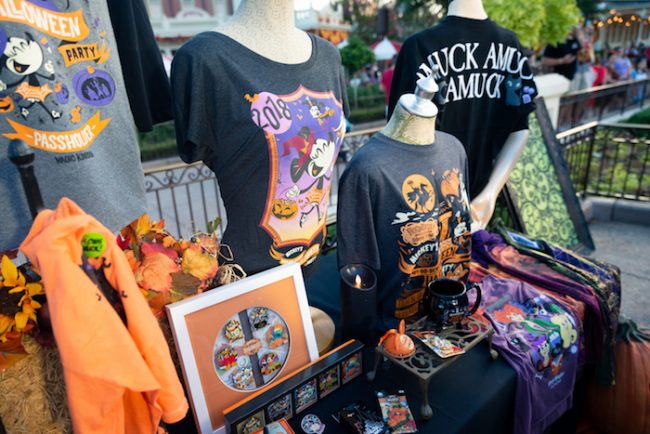 Will the merch of yesteryear make an appearance at this year’s party? Photo by Courtney Reynolds

Merch collectors, take note. Starting in August, you’ll want to track down these Halloween goodies. Be on the lookout for the new Halloween spirit jersey on sale at Walt Disney World, Disneyland, and shopDisney.

If you’re looking for accessories to take your costume from good to spellbindingpick up the new light-up Minnie Mouse Ear Headband and Halloween glow-up bubble wand.

Of course, there’ll be new The Nightmare Before Christmas other The Haunted Mansion merch too 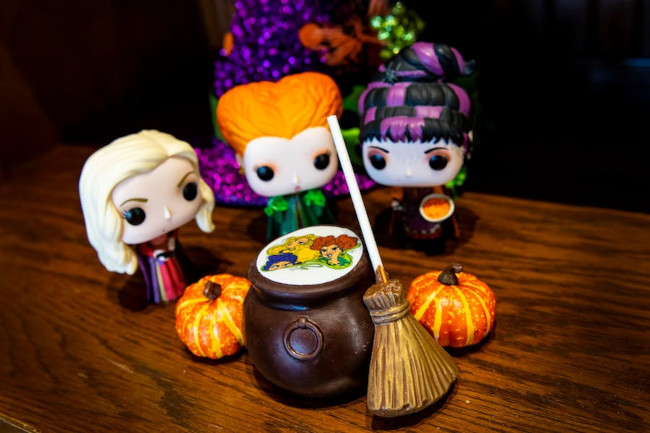 To celebrate Halfway to Halloween, Disney Parks is making us rethink our definition of ghoulish snacks. (Not that we’ll ever say no to candy.)

From Blue Ribbon’s Cheddar Pickle Dog (A Frankenstein frank? A Frankenweenie?) to the Sister’s Elixir Hot Cocoa Bomb, there are more than a few options to scare up an appetite.

Oh, and did we mention that there are Two collectible popcorn buckets up for grabs?

Tune into Disney Channel and you might catch a shout-out from the cast of Hocus Pocus 2. Photo courtesy of Disney+/Twitter

A wicked spell has been cast over Disney Channel. And by “wicked,” we mean totally excellent.

Starting tonight (April 28th) and all weekend long, you can use your television remote to conjure up Halloween-themed programming on Disney Channel.

You may even catch a special shout-out from the casts of Hocus Pocus 2 other Doctor Strange in the Multiverse of Madness.

So what do you think? Has this 2022 Disney Halloween Events preview turned you into a grim grinning ghost?

We’re only halfway to Halloween, so there’s plenty more hair-raising and spine-tingling fun to come. Need your Disney Halloween fix? Pick up a copy of our collectible Boo To You! issue from our online store.

Natasha is a brand copywriter, storyteller, and unapologetic pop culture lover. As a ’90s kid who lived in great fear of the Disney Vault, Disney+ is the childhood dream she always wished would come true.