…transportation! That’s right, getting to the parks, between the parks, and generally around Disney World can be a challenge, especially when you factor in technical difficulties, weather conditions, or crowds. One of the most popular ways to get around is the Disney bus system, but it can also be one of the most confusing, simply because of the overwhelming variety of things, there is to know about it! So today we’re sharing our complete guide to taking the bus at Disney World and breaking down the confusion.

First things first — WHERE do the buses go at Disney World? Well, the easy answer to that is…pretty much anywhere! If you’re trying to get to one of Disney World’s four theme parks from your Disney World Resort, the buses typically begin running at least 45 minutes prior to the park’s opening time for the day. (Although we’ve often seen them run even earlier than that.) The last bus back to your hotel will be one hour after park close. 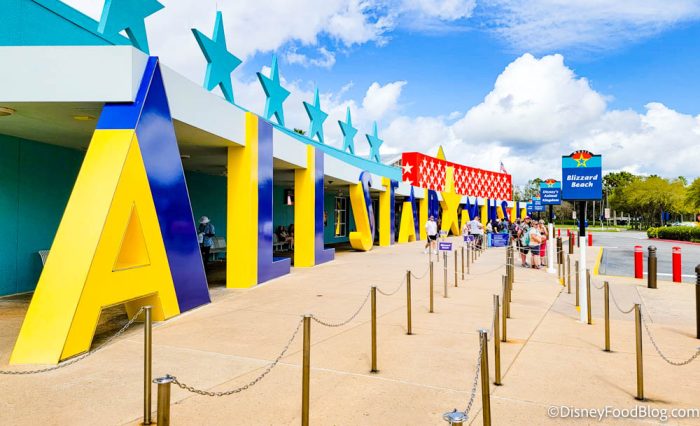 Bus pick up in front of All-Star Music Resort

For those heading to Disney Springs from their hotel, you’ll be able to take a bus starting during Disney Springs operating hours. The final return bus will depart Disney Springs one hour after it closes. Keep in mind that currently, buses are NOT running between the parks and Disney Springsso if you want to do both on the same day, you’ll need to go to a resort first and take a bus from there. 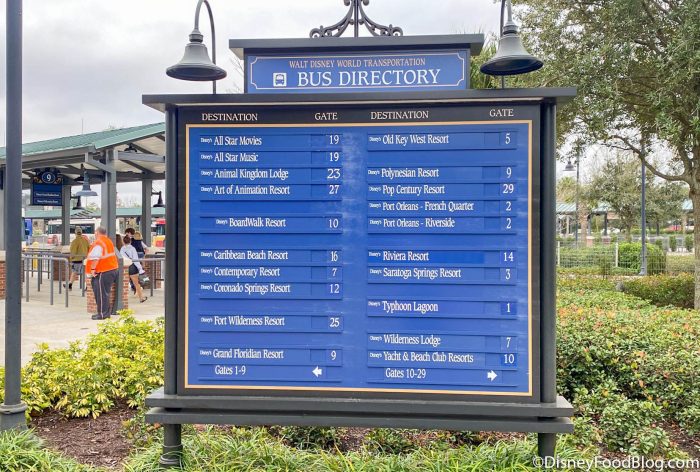 And if you’re heading to one of the water parks, Disney’s Blizzard Beach or Disney’s Typhoon Lagoon, things are a bit more complicated! Typhoon Lagoon visitors will need to first take a bus to Disney Springs, then transfer to the Typhoon Lagoon bus at the Disney Springs station. To get to Blizzard Beach, there is sometimes a direct shuttle from the individual resorts but other times, you’ll need to ride to Animal Kingdom and transfer buses there. These buses will typically begin running one hour before park open and end their run one hour after park close. 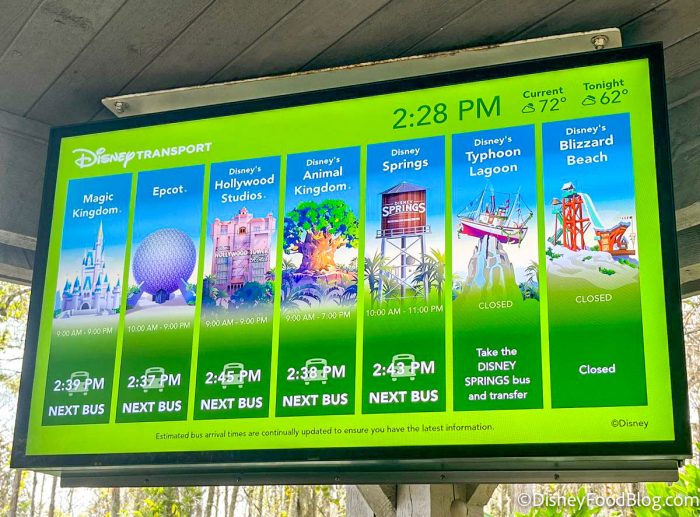 Most of the time, buses do not run between the Disney Resortsalthough there are occasional exceptions for the All-Star Resorts and the Port Orleans Resorts. You may also sometimes see buses running between hotels when the Skyliner or monorail is closedbut we don’t recommend planning your transportation strategy around the hope that you’ll be able to take a bus between the hotels — most of the time, it isn’t available.

There are also a few rules that you’ll need to be aware of if you’re taking a ride on a bus at Disney World! first of all, luggage is not permitted on the Disney World buses, and guests are not allowed to bring alcohol onboard. 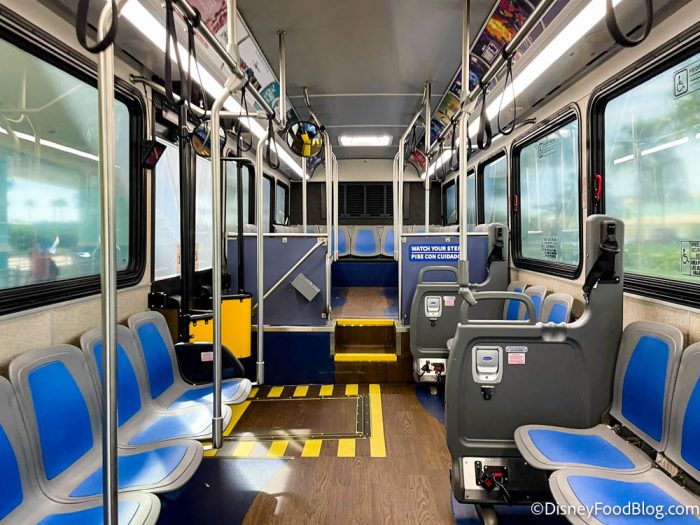 Guests traveling with strollers will need to fold them up before boarding (that means you’ll have to take the little ones out of the strollers to ride!), and they’ll need to be stowed out of the way of the aisle. If you’re using a medical stroller for someone with a disability, that will be treated the same as a wheelchair.

Click Here to See the Unwritten Rules of Disney World!

Things You Need to Know

If you’re traveling during certain times or between select locations, your trip may take a bit longer than you’d expect. First of all, if you make it to the park early in the morning and then decide to go back to your hotel before 11AM, you’ll probably be waiting quite some time for a bus. Early in the day, not many guests are heading back to the room yet, so the number of buses running is much lower than it will be at midday or into the afternoon. 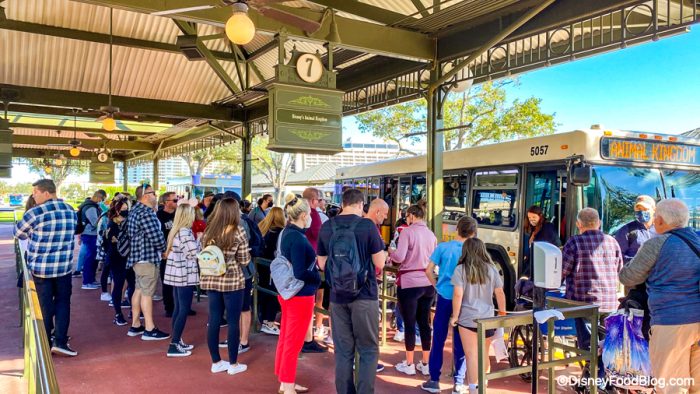 One big tidbit that you may need to know if you’re staying at select hotels is that there are internal bus shuttles for large resorts! Old Key West, Saratoga Springs, Port Orleans, Caribbean Beach, and Coronado Springs all have internal bus shuttles since the resorts are made up of several buildings. At these places, you may have to stop off at a few different bus stations before leaving to go to the parks, or you may have to make a few stops on the way back at the end of the night. They should also each have a bus that runs internally between the stops — that way you can catch a ride to the main buildings where the lobby and dining options are located. 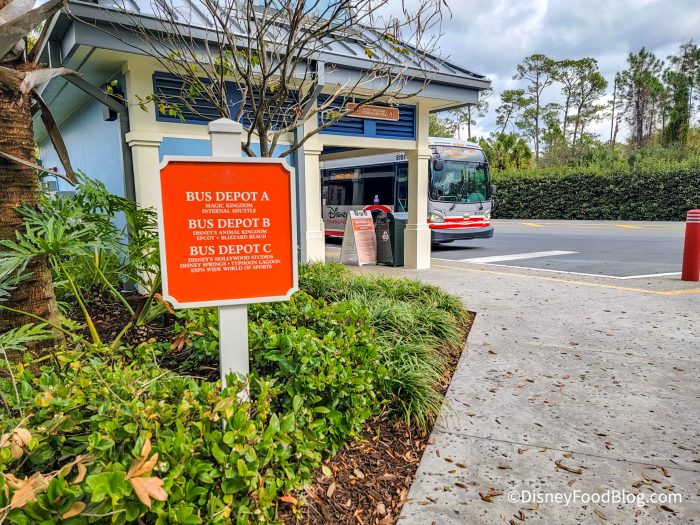 Caribbean Beach has an internal shuttle!

And speaking of the afternoon — if you’ve got a Park Hopper ticket, those buses won’t run between parks until about 1:30PM. Park hopping starts at 2PM, so there’s no need for park-to-park buses to run any earlier in the day. 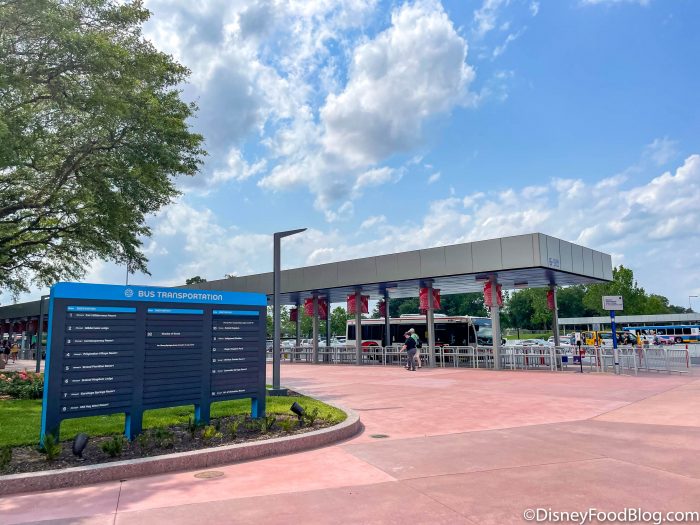 Then, there are some spots where it just feels like it takes forever to get ANYWHERE. Animal Kingdom, Animal Kingdom Lodge, Coronado Springs Resort, and the All-Star Resorts are somewhat clustered on one end of Disney property to themselves, so your bus rides from those places may take longer than others. 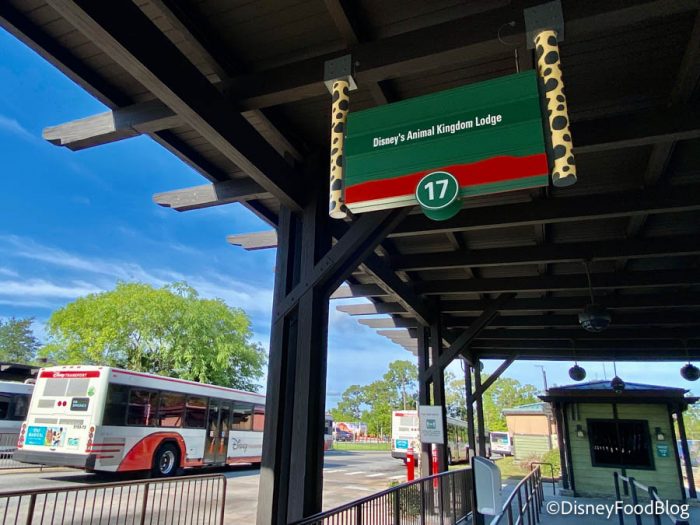 Don’t even get us started on the bus ride between Magic Kingdom and Animal Kingdom! You could probably take a nice midday nap during that one. 😜

9 Critical Things You Will Forget to Do During Your Disney World Trip — Click Here!

And finally, let’s talk tips and best practices! What can you do to make those bus trips less bothersome? Well, for starters you’ll want to be familiar with the rules that we mentioned above. If you’re getting ready to hop on the bus, make sure that your adult beverages have been downed and your strollers have been folded. It’ll make the loading process a lot smoother! 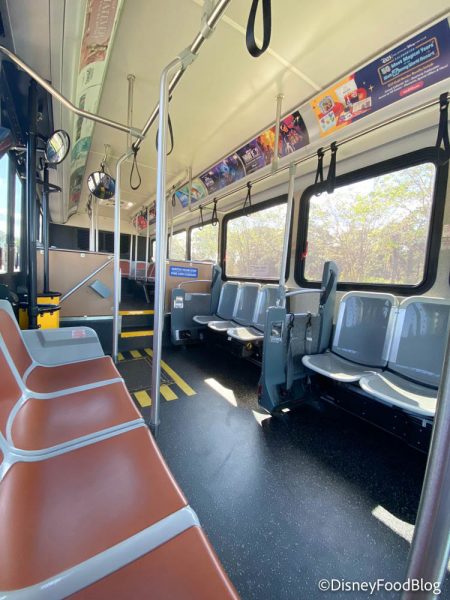 Know the rules before you board!

So, we recommend that you budget around an hour for transportation, no matter where you’re traveling! That may seem excessive, but you won’t just have to count the transit time, you’ll also need to schedule in time to wait for the bus to arrive, load the bus, travel, unload, and head inside wherever you’re going. (You may have to walk from the bus stop when you get there, as well!) It can be a longer trip than you think. 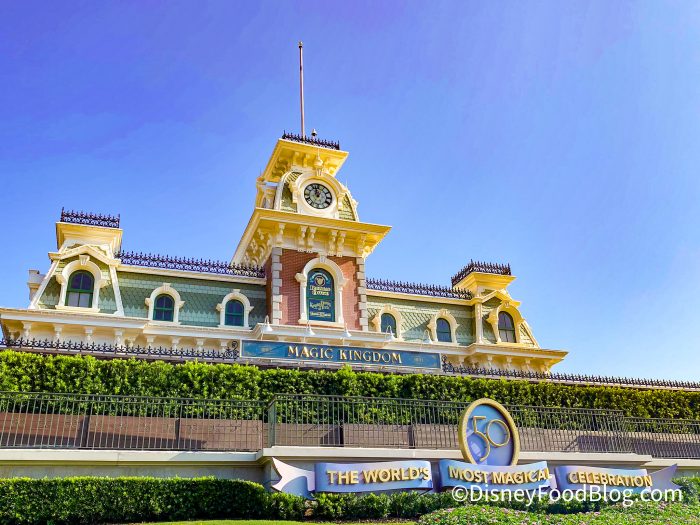 It may take a while to hop between parks!

If you’re trying to get to the parks for rope drop, budgeting extra time is especially important. Even if a bus doesn’t arrive until 45 minutes before the park opens, resort guests will begin lining up much earlier than that. If you show up at the bus stop right at that 45-minute mark, then you might miss the first couple of buses when they fill up. And often, we find that buses show up earlier than the 45 minutes, sometimes up to an hour before park opening time! 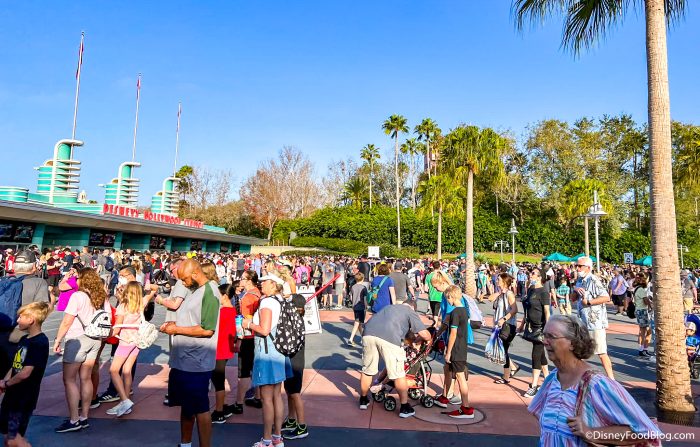 Taking the bus can be a hassle sometimes, but it can also be your trip’s savior when bad weather shuts down the Skyliner or the monorail goes down for technical difficulties. Don’t underestimate the simple, straightforward power of a Disney bus! And for all the tips on Disney transportation and how to best navigate your upcoming trip, stay tuned to DFB. We’re in the parks every day, and we’ve got all the best advice for your vacation!

Unexpected Problems You’ll Have on the Skyliner at Disney World — Click Here!

Do you like taking the Disney buses? Or do you prefer other methods of transportation? Tell us in the comments!