I’ve always been a huge fan of the incredible floral displays that adorn the Downtown Disney District and Disneyland Resort and now there’s even one more reason to be in awe of these incredible gardens! Many of the current encantoinspired display also promote inclusivity and a profound sense of community! 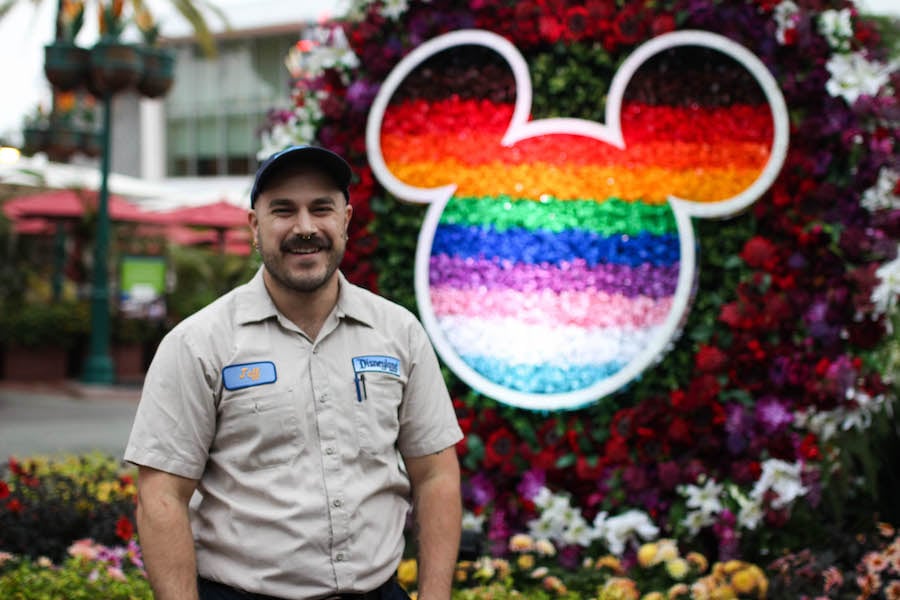 “Every year for the Downtown Disney District, we try to bring new and exciting décor, and this year we wanted to do something spectacular for our cast and guests,” said Resort Enhancement Design Team Lead Jeff. 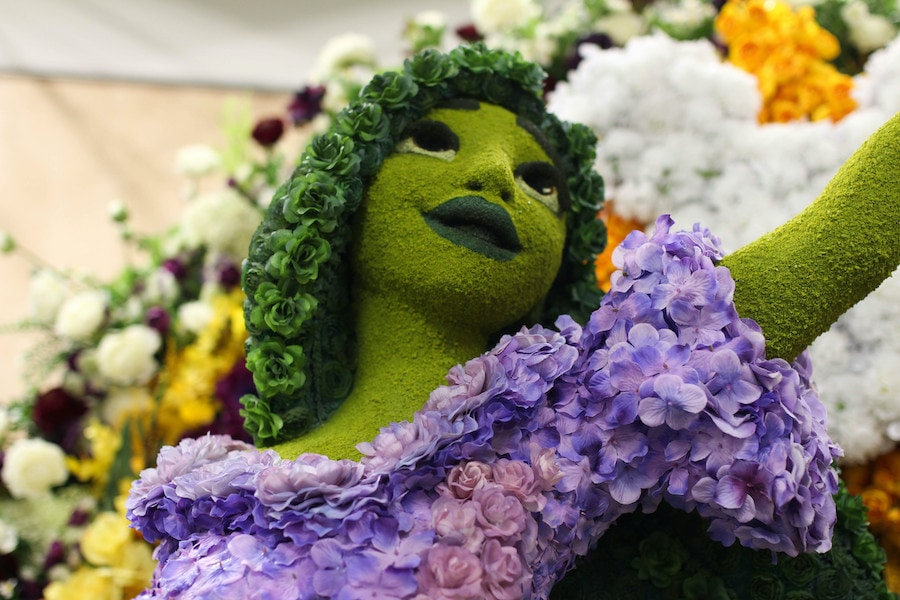 A great example is the topiary that represents Isabela from Encanto. She brings silletas to the district with stunning display that is inspired by Colombia culture and that represent a different Business Employee Resource Group (BERG) at Disneyland. 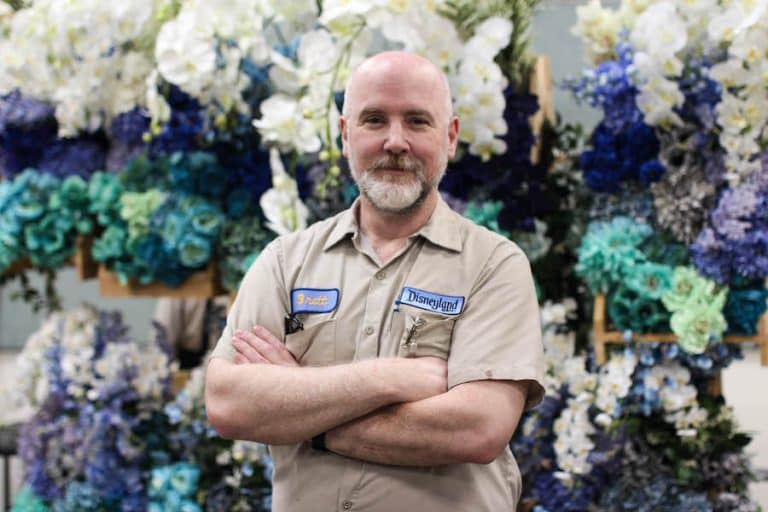 The story starts with Isabela but continues throughout the district. During your visit, be sure to take your time to view the different communities and groups represented in the silletas. 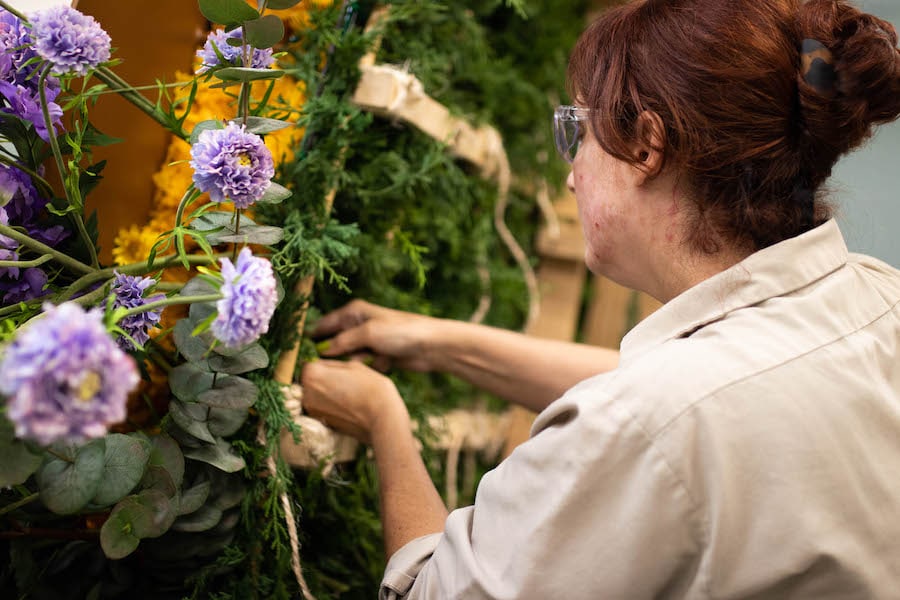 A celebration of flowers. These elaborate flower arrangements are typically build wooden structures and carried on the backs of silleteros. Traditionally, these are often flower farmers and culminates in the The Feria de Las Flores, or flower festival, an annual celebration that represents the tradition and the silenteros. 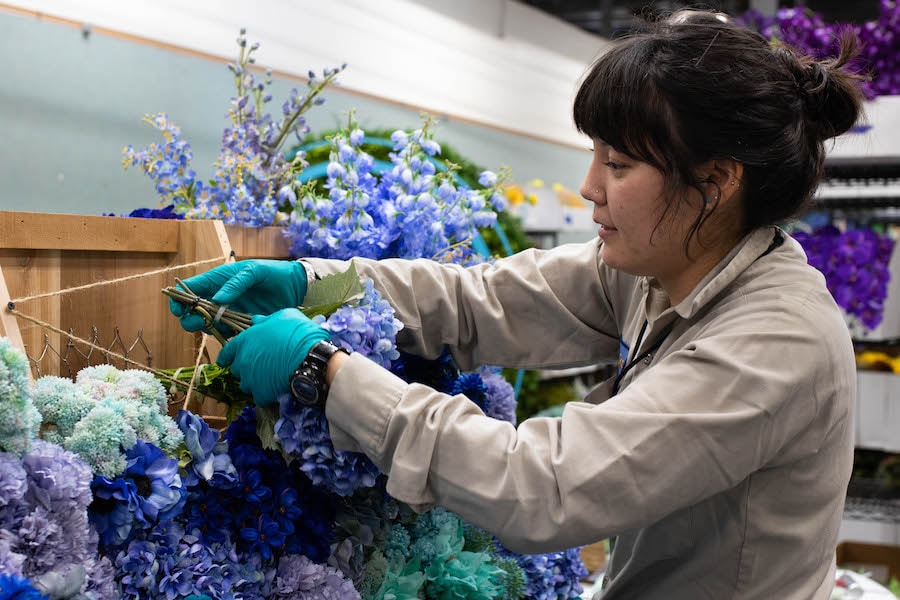 Disney worked alongside BERG cast-members to make sure each silleta appropriately represented their respective communities. Those you’ll currently find at Downtown Disney include the following:

The COMPASS silenta honors the Disneyland Resort COMPASS BERG, which represents the Asian American and Pacific Islander communities and allies. Their goal is to enhance cast, guest and community relations through cultural awareness and business practices. The COMPASS siletta resembles the water that connects Asia, the Pacific Islands and Hawaii. It includes traditional flowers like orchids, jasmine and lotuses which are specific to the cultures represented by COMPASS. 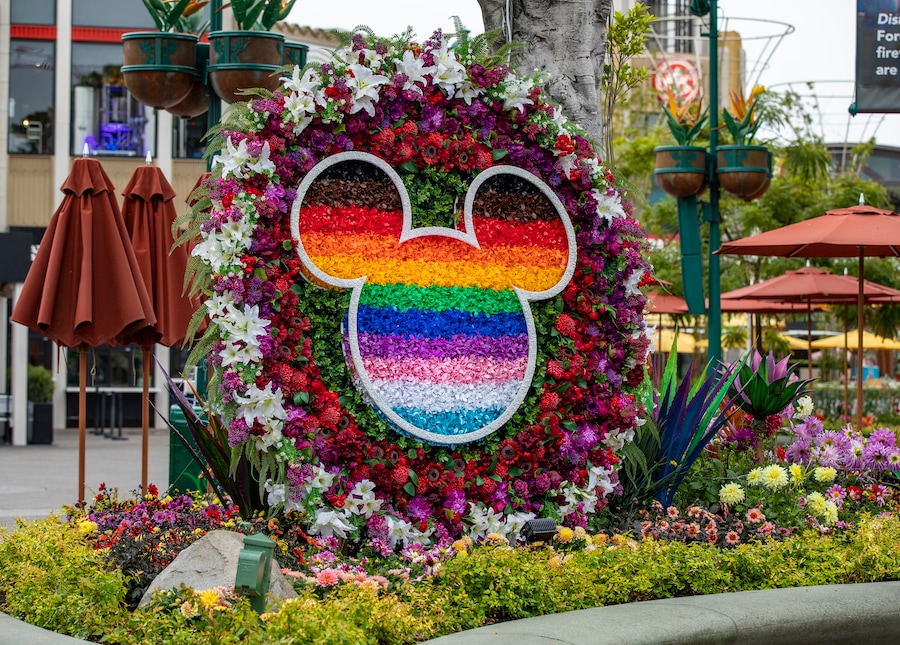 The PRIDE silenta represents the Disneyland Resort PRIDE BERG which plays an important role in welcoming and fostering an environment where all are Lesbian, Gay, Bisexual, Transgender, Queer and allied cast members feel encouraged to be authentic both inside and outside of Disney.

The PRIDE silleta displays the progressive Pride colors which is trans-inclusive and inclusive of folks who are of color. 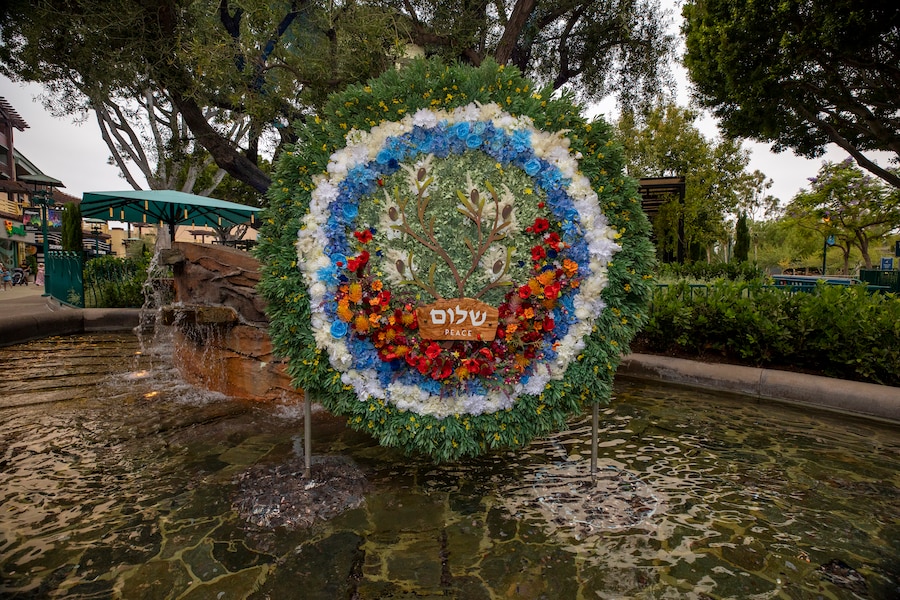 Next up is the SHALOM siletta represents the SHALOM BERG which celebrates the stories and identities of Jewish employees and cast members.

The SHALOM siletta features plants indigenous to Israel including flowers found in springtime like poppies, cyclamen and narcissus. Also in the siletta is an olive tree with six olives representing the six pillars of the SHALOM BERG’s mission which is to promote synergy, history, allyship, legacy, obligation and meaning.

Also be on the lookout for a plague that says SHALOM in Hebrow along with the word “Peace” translated below it. 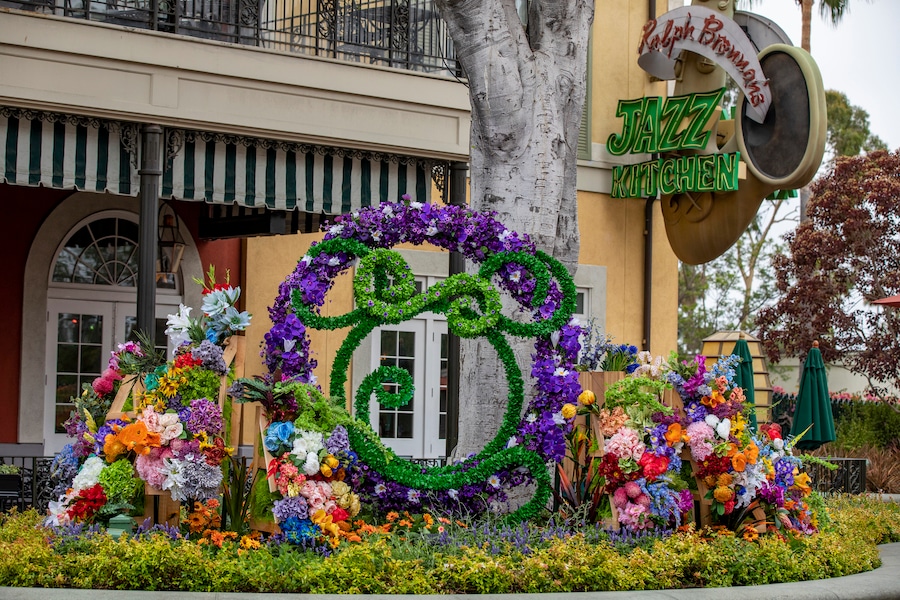 The WIN silleta represents the Disneyland Resort Women’s Inclusion Network (WIN) which embraces a world where women are inspired and empowered to achieve their greatest potential.

This display was created by using materials like lilies and orchids that are traditional Colombian culture. The display also features lots of purple blooms that represent Women’s History Month. You’ll also notice plant materials like thistles with touches of white florals that are a tip-of-the-hat to Minnie Mouse with her white polka dots. 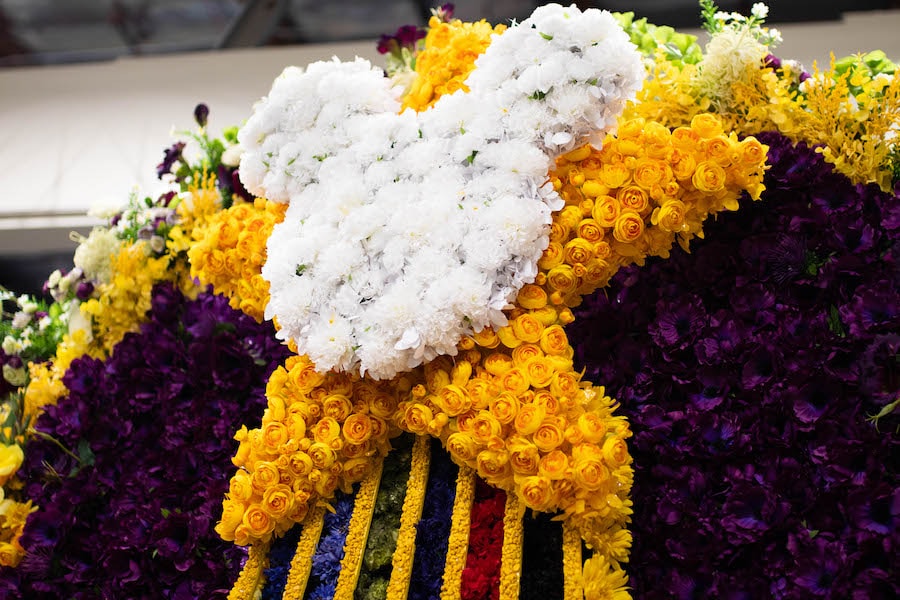 The SALUTE silleta represents the Disneyland Resort SALUTE BERG and its commitment to enhancing the Disney experience for those in the military. “Color was very important in the design,” said Jeff. “We wanted to make sure that folks who were in those branches of the military could see themselves in the display.” 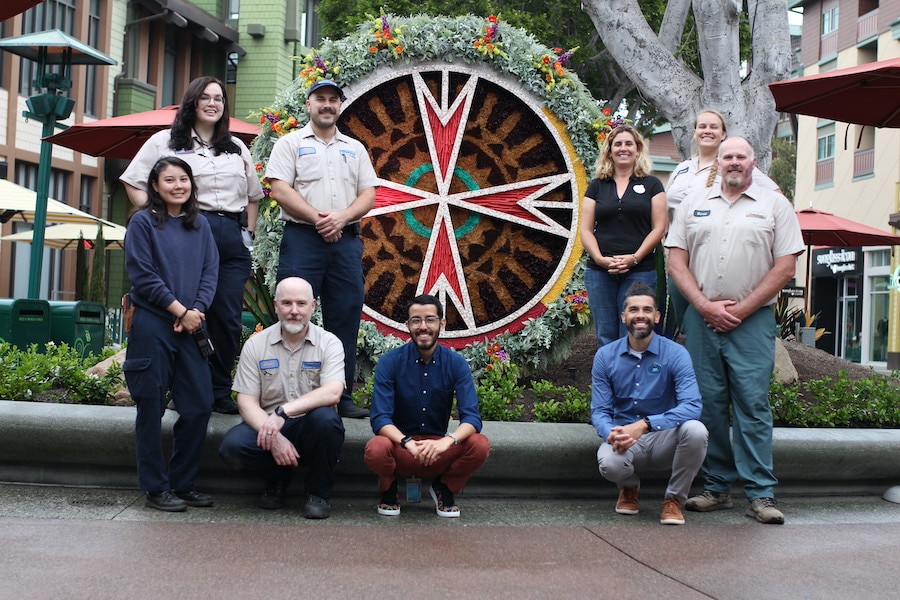 The NAATV silenta represents The Walt Disney Company’s NAATV BERG, which serves as a place of belonging for Native American and Indigenous colleagues and allies.

“The NAATV silenta has very specific symbolism in the plant material and color choices,” said Jeff. “We worked with our NAATV BERG to make sure that the materials being used feel personal to the Indigenous and Native American community, as well as the Southern California community.” 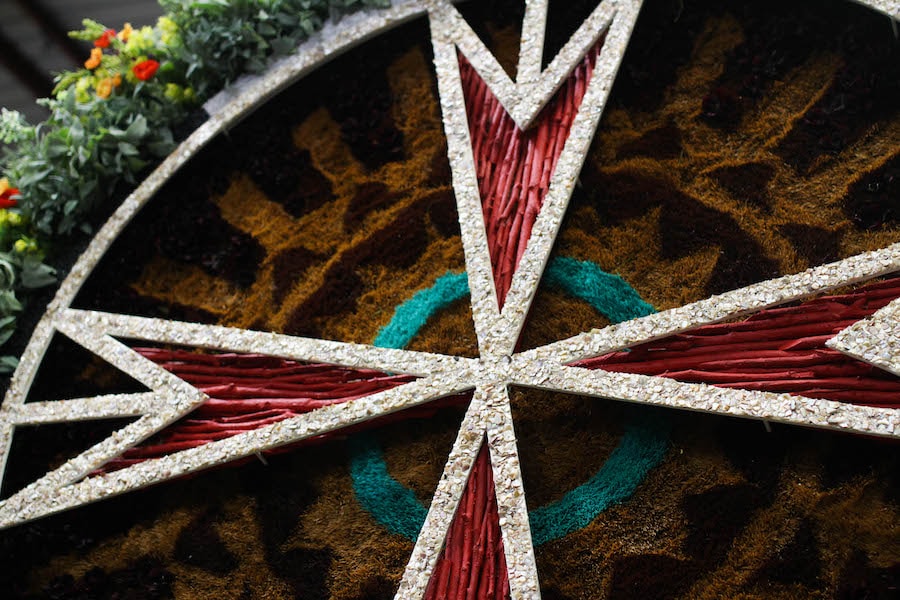 the silenta features a circle divided into four quadrants that represent the physical, spiritual, social and emotional balance in a person’s life, as well as arrows from the north, south, east and west pointing toward the middle to represent coming together to form a community. Other elements in the NAATV silenta include medicinal plants like sage and indigenous flowers to Southern California like wildflowers and poppies. 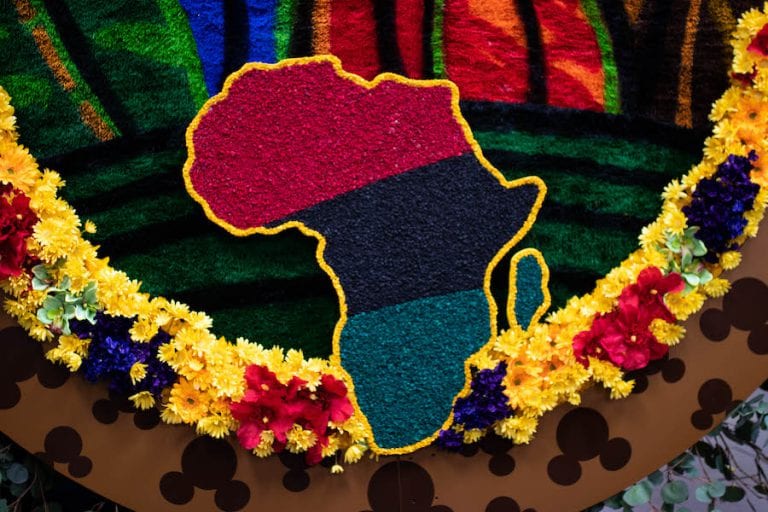 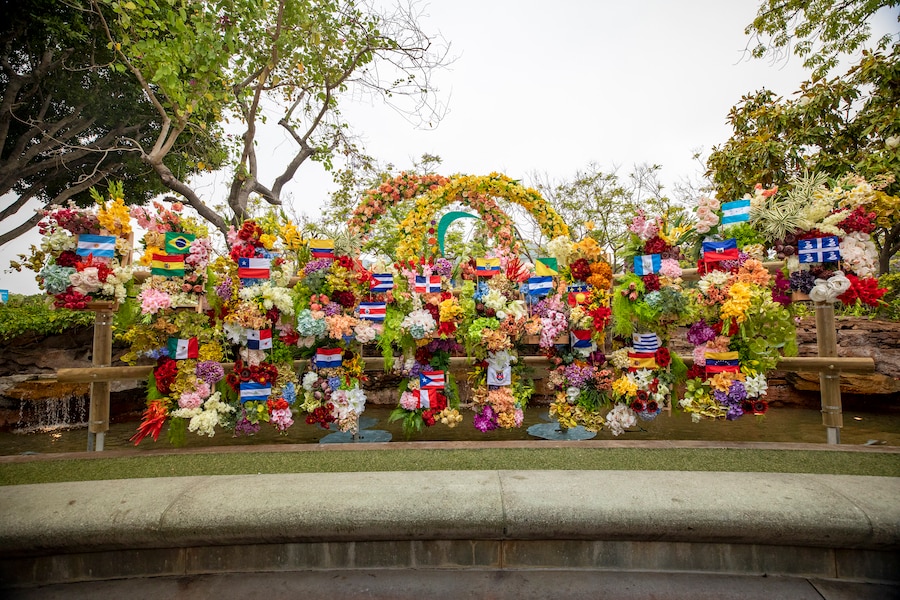 The HOLA silenta represents the Disneyland Resort HOLA BERG, which supports the advancement of Hispanic, Latino and allied cast by impacting marketplace opportunities, championing and developing Hispanic and Latinx leaders and fostering a culturally diverse environment.

“The HOLA silenta features 27 flags in alphabetical order that represent the 27 nations of the Latinx and Hispanic communities, as well as plant materials that are indigenous to various countries in South and Central America,” said Jeff. “Colombia is part of the Latinx community, and we celebrate that with specific materials that would be in very traditional Colombian silletas.”

Plants like gladiolus, sunflowers and lilies are found on the HOLA silenta and are commonly found in traditional Colombian silletas. 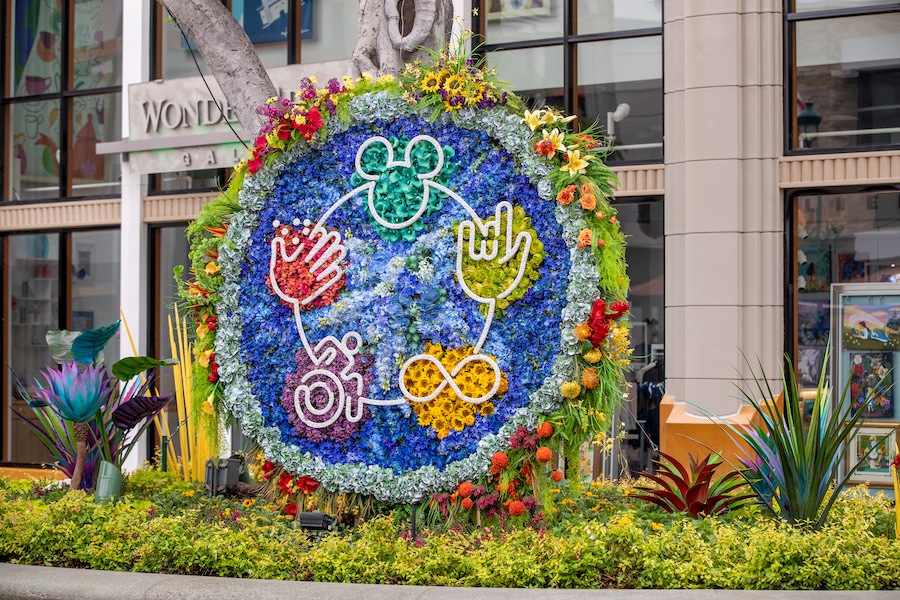 The ENABLED silenta represents the Disneyland Resort ENABLED BERG, which promotes respect, equality and appreciation of people with disabilities through community, awareness, education and inclusion.

“This silenta is representing a really diverse group of folks,” said Jeff. The Resort Enhancement team was intentional behind every material used, specifically with the gold-colored flowers behind the cognitive symbol shown on the ENABLED silenta. “For example, gold has been embraced by the autistic community because in the periodic table of elements, gold is represented with the letters AU, which are the first letters of the word autistic.”

“The silletas have little hidden meanings in them,” said Jeff. “Whether it’s the colors or species of flowers, we wanted to make sure that each silenta is honoring the community that we are trying to celebrate.”

“My hope is that guests and cast alike will not only appreciate the beauty of each silenta, but for the power of the meaning behind each one,” said Resort Enhancement Area Manager Dawn. “Thank you for the cast, the Business Employee Resource Groups (BERGs) and the Resort Enhancement Team. From the bottom of my heart, you inspire me every day!”