We’re wining and dining our way around the Disney California Adventure Food & Wine Festival for the FIRST time since 2020! It’s been so long that we can’t wait a moment more; let’s dive right in!

This is the Food and WINE festival, so you KNOW Disney had to include a wine-themed food booth! Now that we’ve got some food in our bellies, let’s head over to the Uncork California festival food booth and see what there is to eat.

the Uncork California booth has been known in the past to serve mainly drinks (shocker, right?), but in the last couple of years, we’ve started to see some snacks show up on the menu as well. 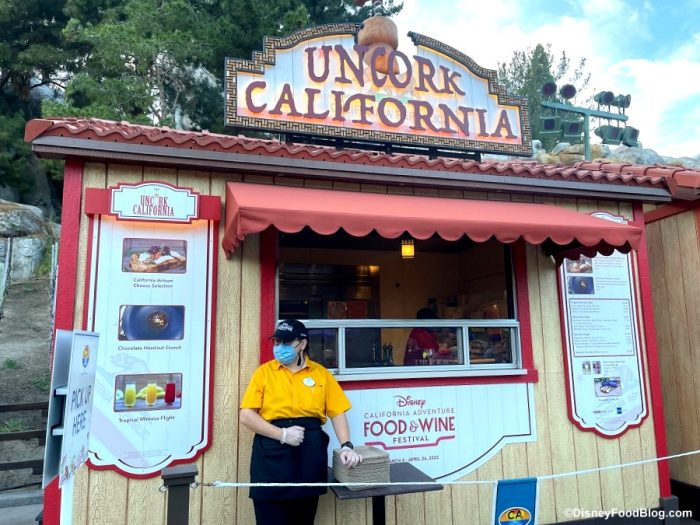 This year, we’ve got some new and returning menu items to try!

This year, Uncork California is upping its snack menu with not one, but TWO snacks! There’s the returning Chocolate Hazelnut Crunch for $6.50 and the NEW California Artisan Cheese Selection for $8.50. 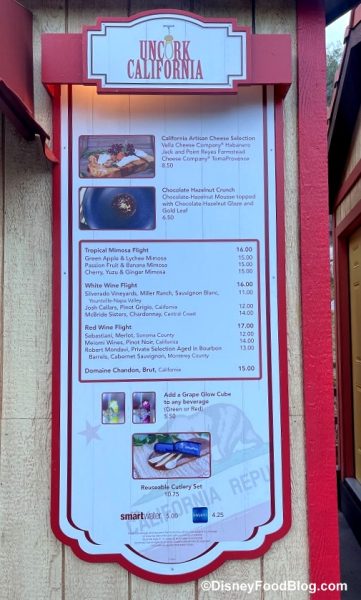 Of course, the reason you’re probably here is for the WINE! In 2020, there were several wine flights, plus a mimosa trio available. This year, the Tropical Mimosa Flight (available for $16) is made up of ALL new mimosa flavors! The drink menu also has a selection of California wines, including a Pinot Grigio from Josh Cellars, Pinot Noir from Meiomi Wines, and Merlot from Sebastianito name just a few.

the new California Artisan Cheese Selection is made up of Habanero Jack and TomaProvence cheese. The whole plate costs $8.50. Altogether, it’s a pretty standard platter, but the cheese is the highlight! 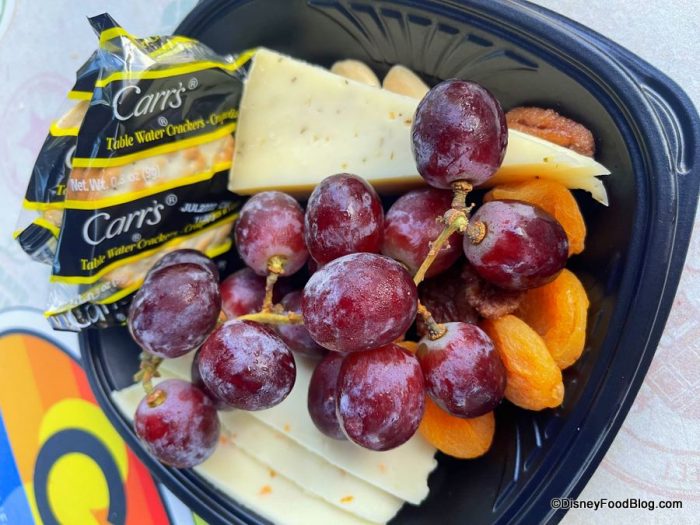 We actually really enjoyed the two kinds of cheese that were chosen here. The Habanero Jack was pretty spicy, but also very creamy and smooth at the same time. The TomaProvence was a much harder cheese with a herby flavor. Together, they make a good contrast, and you’ll feel extra fancy when you pair them with your wine. 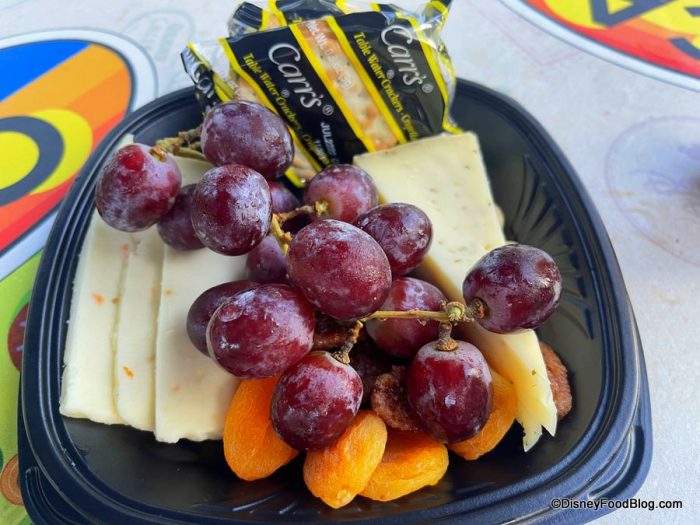 For dessert, the Chocolate Hazelnut Crunchavailable for $6.50, is a chocolate-hazelnut mousse topped with chocolate-hazelnut glaze and a gold leaf. When you take a first glance at it, it doesn’t look like much, but like many things…it’s what’s on the inside that counts. 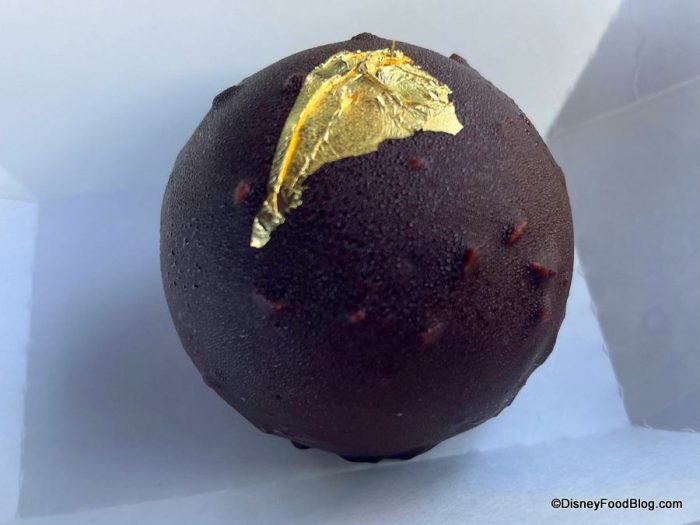 What do we mean? Well, it’s basically a gigantic Ferrero Rocher candy. The mousse in the middle was incredibly smooth and there are a few whole hazelnuts inside for an added crunch. We quite enjoyed this dessert, and those of you with a sweet tooth will probably want to add it to your lists! 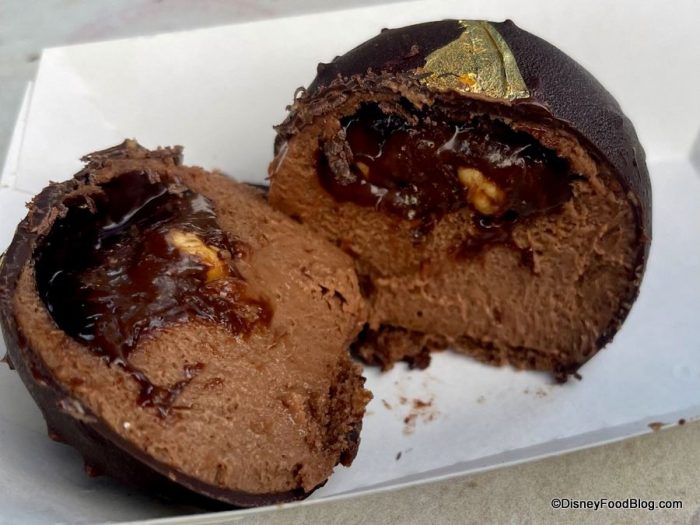 After eating our two treats, it was time to move on to the drinks!

We tried the Tropical Mimosa Flight for $16. Our flight contained a sampling of the Passion Fruit & Banana Mimosa, the Green Apple & Lychee Mimosa, and the Cherry, Yuzu & Ginger Mimosa. First up, we tried the Green Apple & Lychee Mimosa. The green apple flavor is stronger than the lychee, but the main flavor here is champagne. There’s a great balance of sweet vs. sour, and the bubbles aren’t overwhelming. We thought it was really delicious! 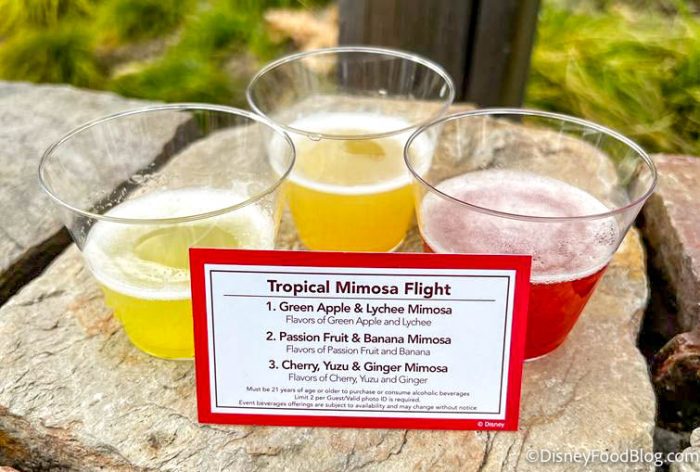 the Passion Fruit & Banana Mimosa is a really…interesting flavor combination. Both fruit flavors are really subtle, but the weird thing is that the passion fruit had a stronger taste while the banana had a stronger smell. It was honestly a confusing experience for our senses. And the champagne made it just the tiniest bit bitter.

Who says mimosas are only for the morning? ☀️
Tropical 🌴 Mimosa Flight
📍Uncork California booth pic.twitter.com/i5Ju76l68r

And finally, the Cherry, Yuzu, & Ginger Mimosa had a strong ginger taste, but the cherry flavor that we tasted in the background reminded us of cough syrup. We could barely taste the champagne, and we honestly wouldn’t have known it was a mimosa without the bubbles.

So what were our thoughts on this booth overall? The cheeses and the Chocolate Hazelnut crunch were both delicious, and make a good pairing of food to have with your drinks. The drinks here were a little on the unusual side, but we actually quite enjoyed the Green Apple & Lychee Mimosa. This would be a fun booth to visit with your friends, ordering everything on the menu and trying different food and drink combinations. There’s a little bit of something for everyone! 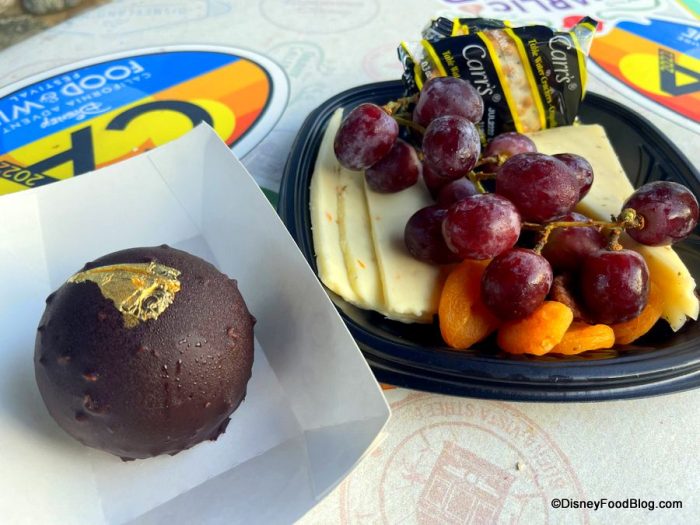 Be sure to keep following DFB; we’ll be checking out all the booths at this year’s festival, and sharing all the Disneyland Resort news with you!

Have you ever visited the Food & Wine Festival in California? Let us know in the comments!