Starwars Day may be over, but that doesn’t mean we can’t still celebrate! During the May the 4th celebration, we tried the Dark Side Chocolate Creation and a Galactic Swirl Funnel Cake at Hollywood Studios, and Mango (yes, mango) Blue Milk at Disneyland!

This is the droid you’re looking for!

One of the best ways to celebrate Starwars Year-round is with a visit to Star Wars: Galaxy’s Edge. There you can get into the intergalactic spirit with a spin on Rise of the Resistance, grab a Ronto Wrap, or take a trip to Oga’s Cantina. We recently stopped by Oga’s Cantina at Disneyland to try some new menu items introduced for Starwars Day and we HAVE to tell you about them!

In celebration of May the 4th, Oga’s Cantina in Disneyland introduced four new menu items: the Five-Blossom Bread, the Fondor Fizz, the Sesid Seltzer, and the Black Squadron Lager. We stopped by on May 5th and these items were still available. We were recently able to try everything except for the Fondor Fizz (when we asked, Cast Members told us it wasn’t available yet). 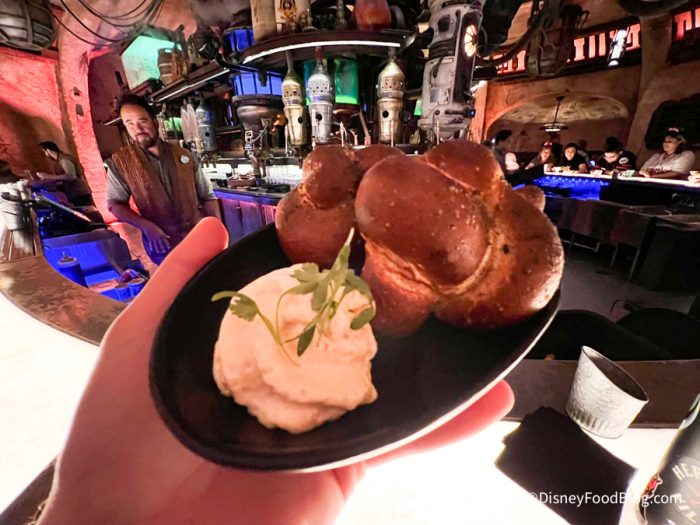 FOLKS — turns out one of Disney’s best pretzels is hiding in SPACE! We really really REALLY liked this! We received it piping hot and found it to be the perfect balance with a crispy outside and a fluffy inside. the salt was a perfect addition with just the right amount on top. 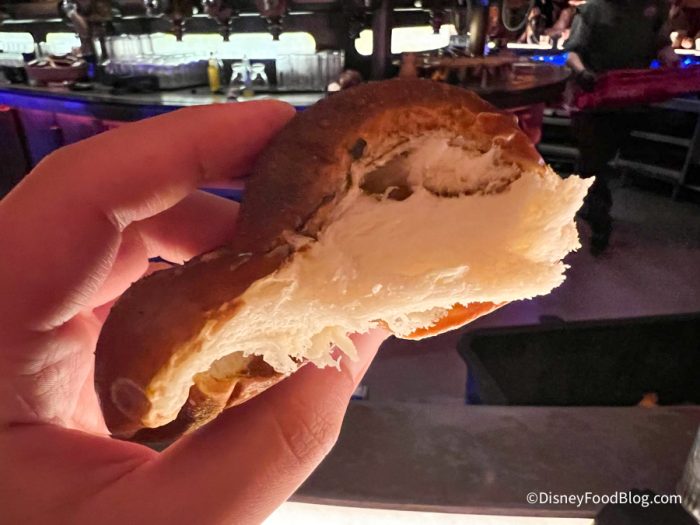 The cheese sauce was pretty standard (did somebody say plastic cheese?) but was thicker than a regular cheese sauce and had a little bit of a kick (not too bad though).

The star of the show was definitely the honey mustard foam. The texture is similar to that of a foamy whipped cream cheese, and it was very light and airy. The flavor was both sweet and spicy — YUM! We recommend dipping your pretzel in both the mustard foam and the cheese sauce to get the best of both worlds (cue the Hannah Montana song!). 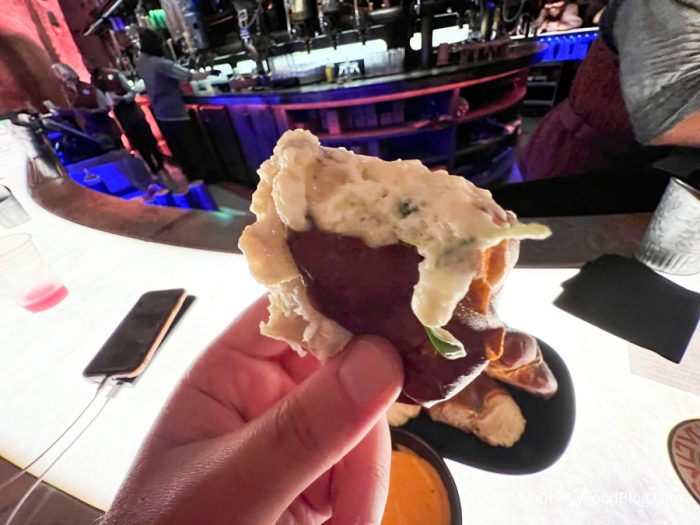 These pretzels are out of this world!

While at Oga’s, we also tried to the Seid Seltzer (try saying that five times fast) which is Tropical Pineapple Orange Hard Seltzer. 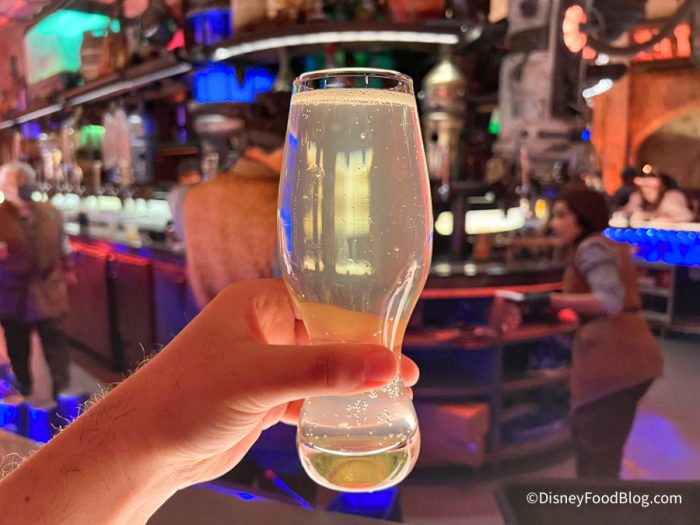 We thought it was just okay. it didn’t have a ton of fruit flavorand it didn’t taste alcoholic either, but rather just like a regular non-alcoholic flavored seltzer water. There was a bit of fruitiness in the aftertaste, but we couldn’t pinpoint any specific fruit flavor (despite the drink being described as Pineapple-Orange flavored). for $13.25, we didn’t think it was worth the money.

We also tried the Black Squadron Lager which is Golden Lager with a touch of Honey. This was priced a little higher than the seltzer at $14.25. 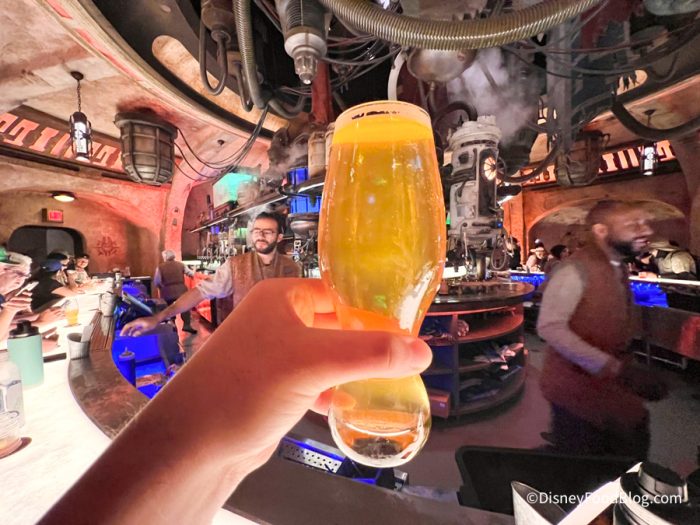 We liked it more than the seltzer, and thought that the honey added a nice touch. It’s very light and mellow in flavor. People who enjoy lager will probably like this drink.

These menu items were introduced as part of the Starwars Day festivities, but (as we noted) they were still there when we visited on May 5th. We spoke to various Cast Members and they didn’t have very clear answers for us in terms of how long these would be around for. One indicated that it would be around for May, while another said they would be available for a limited time through summer depending on how they do, and another said they could keep some of these items on the menu if they’re popular. So the moral of the story is, it’s unclear how long these will be sticking around! Be sure to ask and see if they’re available during your trip! 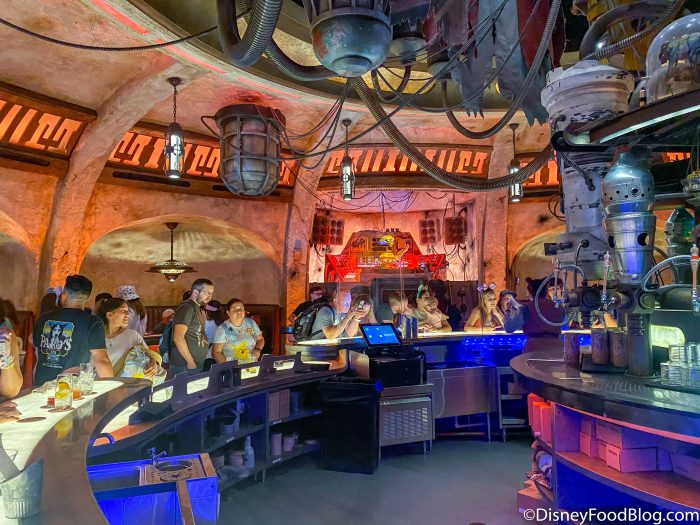 Make sure to stay tuned to DFB for all the latest!

Would you try any of these new menu items from Oga’s Cantina? Let us know in the comments!