OK, listen here. We know that Disney, as a company, is all about them SECRETS! 🤫

They’re constantly hiding little Easter eggs in their movies, adding little nods to important attractions or people in their theme parks, and, over the years, we’ve seen our fair share of hidden Mickeys EVERYWHERE. But there are some little details that only a Disney MASTER will have picked up on, and today we’re sharing our list of the top 16!

Next time you’re in Animal Kingdom, head to Asia to check out a special Imagineering detail. Above the Dawa Bar, you may hear a knocking sound. 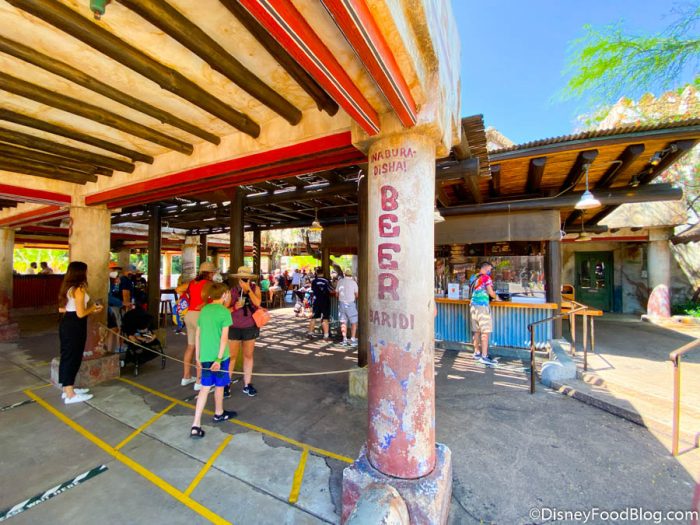 It’s meant to be the landlady knocking on the doors of the students who live above the bar. Apparently, they haven’t paid their rent! 😮

For these next two, you’re going to need a little bit of Starwars knowledge. Think back to the trash compactor scene in Star Wars: A New Hope. The creature that was living in the compactor that our heroes got stuck in can now be found in Galaxy’s Edge at Disney’s Hollywood Studios. 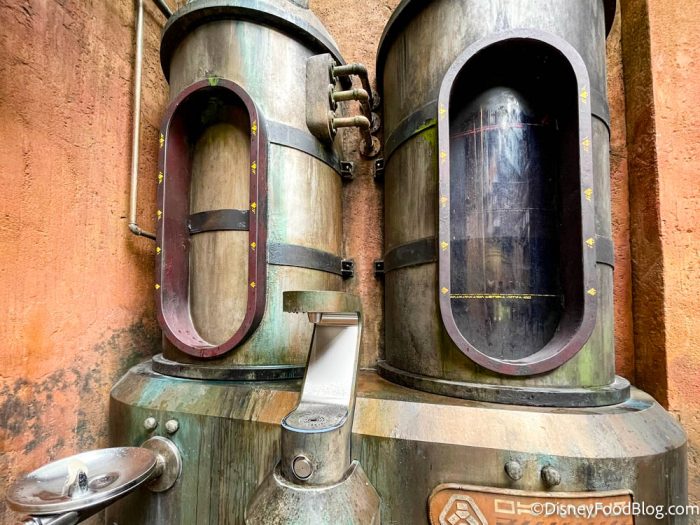 You’ll find him in this water fountain from time to time!

He’s what’s known as a Dianoga and you can find him above the water fountain in the marketplace.

And speaking of that trash compactor scene, make sure to check out the trash cans when you’re in Galaxy’s Edge! Each one has a number on it, and they all match the number of the compactor where Luke Skywalker and his friends got stuck. 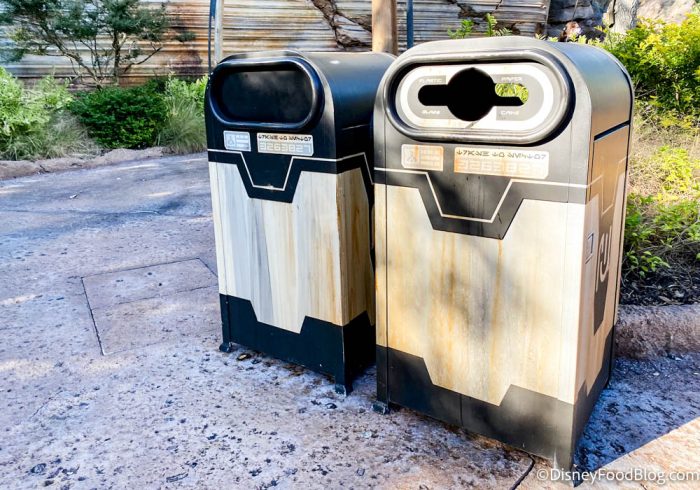 Check out the trash cans!

Guess that tells you where the trash is going!

Heading over to EPCOT, you should definitely check out the new ride — Remy’s Ratatouille Adventure — on your next trip. In the ride’s queue, you’ll walk through a room with Chef Gusteau on a sign, and every few minutes, he delivers a little speech. 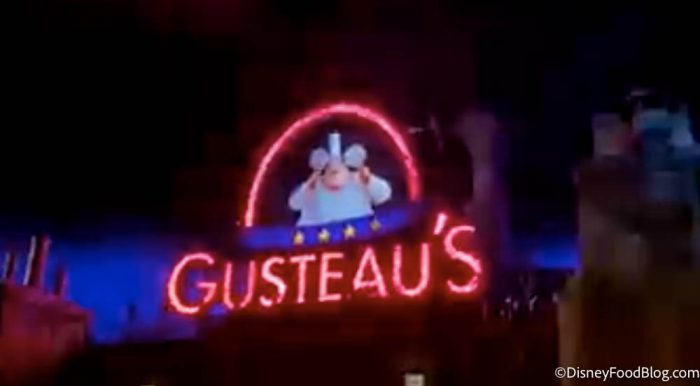 It’s a little fuzzy, but do you spot it?!

Look carefully! Sometimes during his speech, he holds two pans up to his head to make Mickey ears!

Continuing with the hidden Mickeys theme, let’s talk about what may be one of the BEST hidden Mickeys in all of Disney World. There’s an incredibly cool hidden Mickey as you go through the efficiency scanner room in EPCOT’s Test Track. 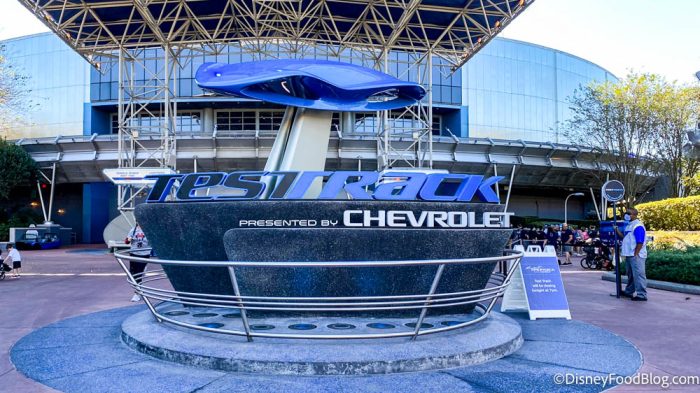 Did you know about the DIGITAL Hidden Mickey in Test Track?

Look at the blueprints on the wall — and find the URL there. If you type that into your browser, you’ll be directed to a website with a little Mickey outline. It’s a digitally hidden Mickey! 😱 AMAZING!

Continuing on the hidden Mickeys trend, let’s take a trip over to Splash Mountain. Next time you’re on the ride, take a look to the left as you’re riding up the large hill before the drop. 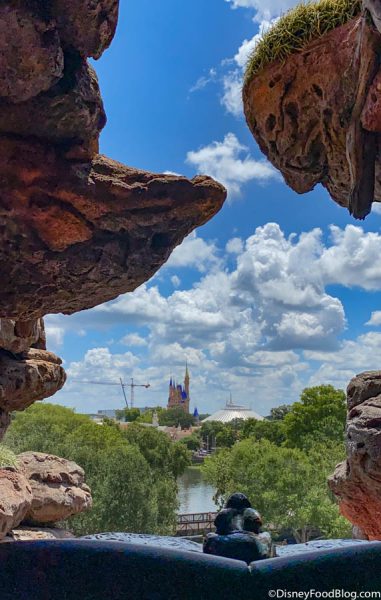 Just as you’re about to go over, you can spot a side profile of Mickey Mouse made out of rocks. How cool!

Click here to see where we found LIVING hidden Mickeys!

Staying in Magic Kingdom for a minute, you know we just HAVE to drop a fun fact about The Haunted Mansion. 👻 If you look at the top of the building, there are a bunch of chess pieces adorning the roof. But one important piece is missing…the knight! 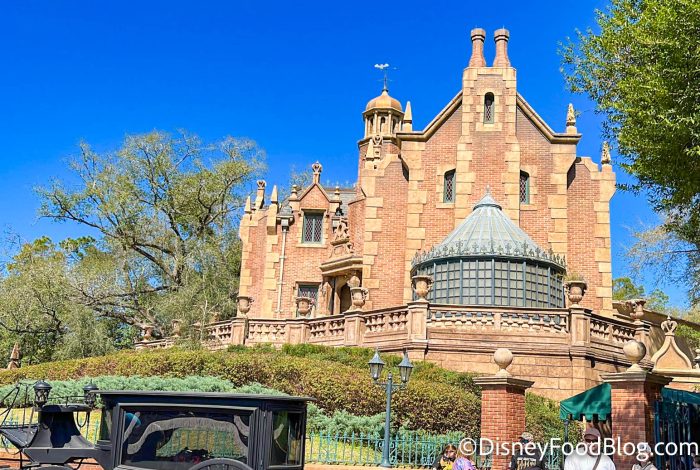 That’s because it’s always “night” at the Haunted Mansion. Get it?!

And finally, to end our Disney World section, let’s take a stroll to Storybook Circus. Did you know that here, you can find a node to all four theme parks in one place? That’s right! If you look at the years on each of the circus cars at the Casey Jr. Splash ‘n’ Soak Station, each one is numbered. Those numbers are the years that each of the four Disney World parks first opened. 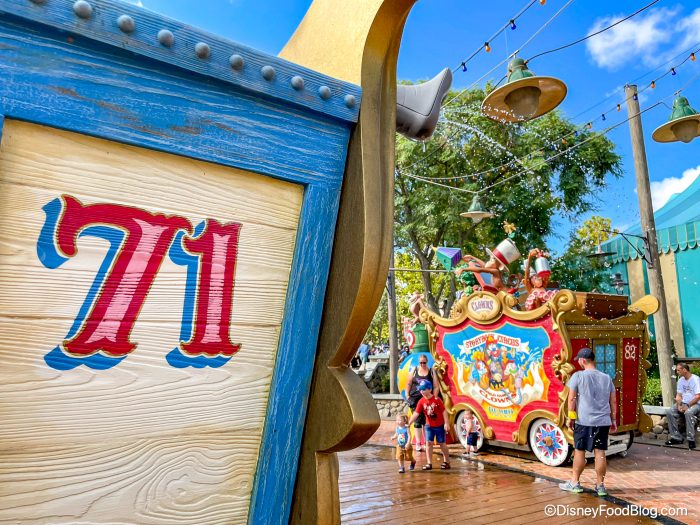 1971 is the year that Magic Kingdom opened!

It’s easy to miss little details like that, even though they’re hidden in plain sight!

For Your Ultimate Guide to SECRET Menus at Disney World — Click Here!

But don’t worry West Coasters, we’ve got some Disney MASTER details for you too!

First up, we need to talk about the Mary Blair doll at Disneyland. Disney Legends Mary Blair did much of the general design work for “it’s a small world” and there’s a nod to her on Disneyland’s version of the ride. As you enter the Western Europe showroom, look back at the Eiffel tower and you’ll find a doll modeled after Mary Blair! 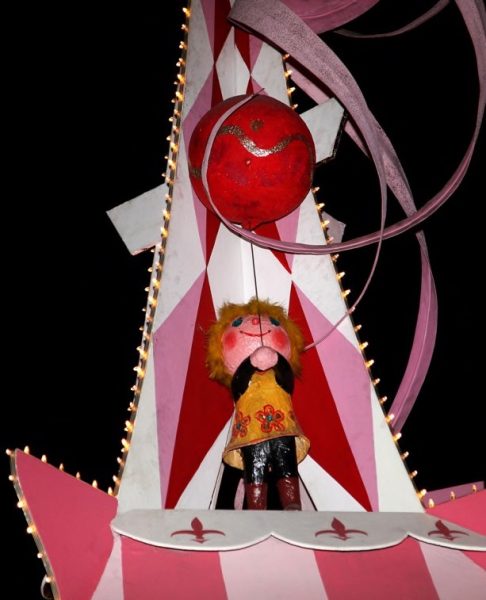 She’s the one with short, blonde hair, holding a balloon, and wearing a floral dress. Be sure to turn around and look UP to find her!

In cars, there’s a scene where Fillmore tells Sarge that every third blink of the traffic light is slower. Sarge doesn’t believe him, but the Imagineers did! They incorporated this small detail into Cars Land when they built it at Disney California Adventure. 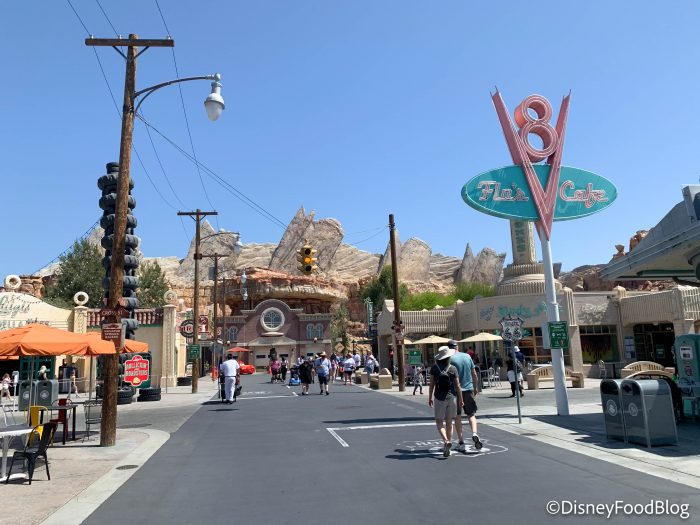 Make sure to watch that traffic light!

Stop and look closely at the traffic light. I’m telling you man…every third blink of the light really is a teeny bit slower!

Also at Disney California Adventure, you can spot a beloved EPCOT character hidden in Avengers Campus. In the queue for Guardians of the Galaxy Mission: BREAKOUT, look up high in the room with all the cages. Here, you’ll find Figment in a box among The Collector’s prized items. 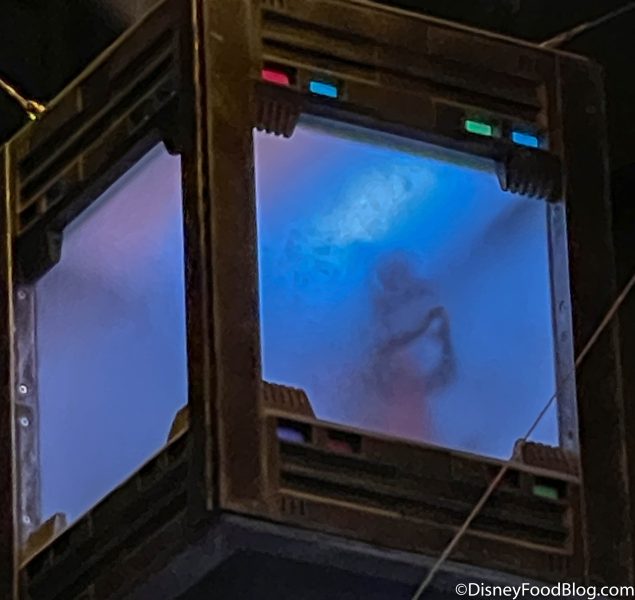 Oh no! How’d you get up there Figment?! He’s a bit difficult to see, but if you look closely at one of the cages in the queue you’ll see the outline of his arms. Poor Figgy!

And finally, let’s head back to Disneyland Park. If you board the railroad in New Orleans Squareyou may notice the telegraph station sign nearby, and you’ll even hear it tapping. 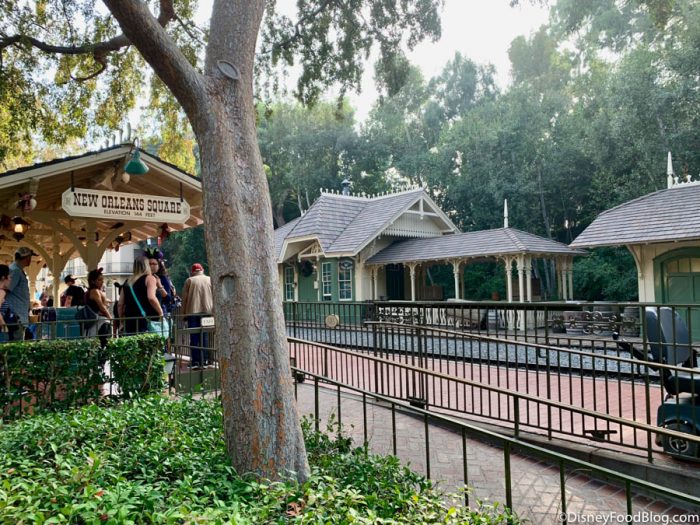 And last on our list, we have to give a special mention to some of the next-level Easter eggs in Disney movies.

In The Little MermaidwHen King Triton arrives at his daughters’ concert, look at the crowd. there, you may notice Mickey, Donald, and Goofy among the masses of people. 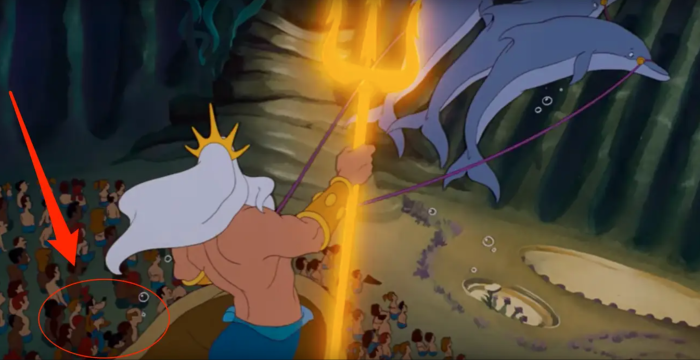 It’s a blink-and-you-miss-it moment so consider pausing those screens!

14 — There May Be Something There…You’ve Never Seen Before

While Quasimodo is singing “Out There” in The Hunchback of Notre Dame he looks out over the rooftop of the cathedral and down into Paris below. Among the people in the streets is a girl in a blue dress with “her nose stuck in a book.” 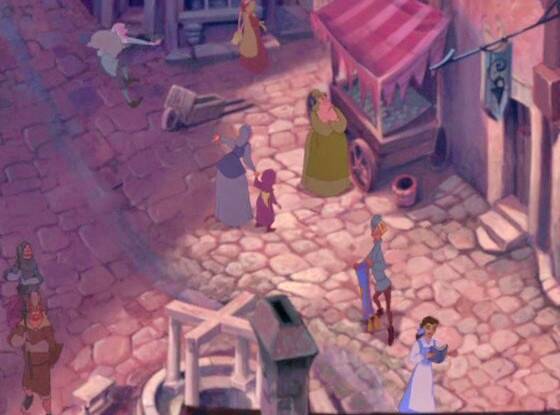 Who do you think that could be? 😉

In the police station scene of Big Hero 6, take a look at the wanted posters on the bulletin board. 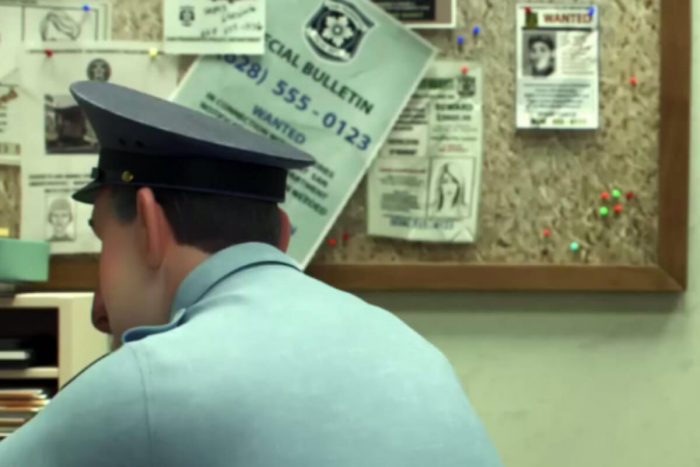 Among those wanted by the cops, you may spot a familiar face — Hans, the villain from Frozen!

Have you spotted these easter eggs in Pixar’s Luca? Click here to see them!

And finally, let’s talk about the “I’ve Got a Dream” scene from Tangled. Here, they’re in the Snuggly Duckling tavern among thieves and ruffians, but there’s one guest you may not have noticed. If you look up in the rafters of the building, you’ll spot a famous wooden puppet — Pinocchio! 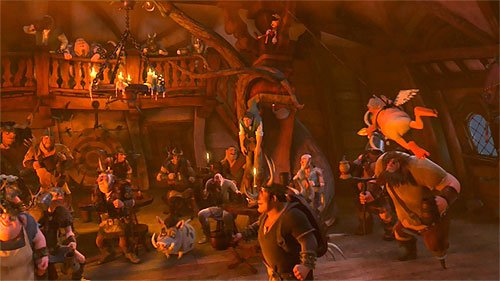 There you have it — 16 of Disney’s biggest Easter eggs and hidden details. How many have you seen before? Keep following along with DFB for all the latest news and Disney info that you need to know!

According to Science, Here’s What Being a Disney Fan Really Means — Click Here

Which of these Disney secrets surprised you the most? Tell us in the comments!