Lately, Disney has been in the headlines for all the wrong reasons. Outsiders look at the company and wonder if it’s failing.

Meanwhile, theme park guests have remained blissfully unaware. We’re too busy mobbing the parks and having the best possible time!

Yes, Disney parks remain the ultimate place for escapism, and I want to celebrate that fact today.

Here are several things that bring me joy at Disney!

My wife sometimes DisneyBounds, which has made me more aware of this practice in general.

Even though I’m color-blind, I can tell shades enough to know general styles. 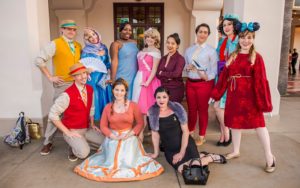 Still, Disney Bounding is only a small part of what I mean. When people visit Disney, they don’t wear their hearts on their sleeves. 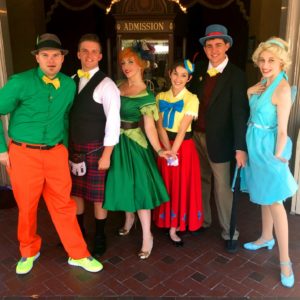 Instead, their entire ensemble often reflects what they love. You can learn a lot about a person at Disney merely by noticing their handbag/backpack, hat, and shoes.

How many other places in the world is that true? Disney fandoms are on display everywhere at the parks, and it makes me happy to watch people embrace their true selves. 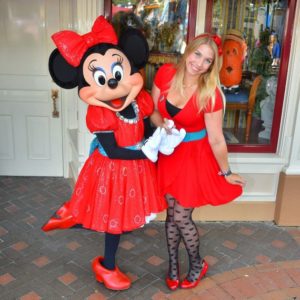 I may have missed my calling in life as an improv actor. In fact, two friends of mine do this stuff regularly, and one recently landed a streaming service gig for his talents.

Something these folks and I love to do is banter and quip, testing each other to come up with better and more entertaining responses in real-time. 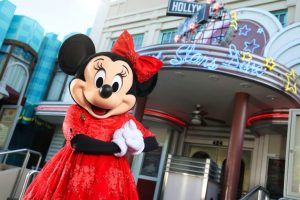 Not coincidentally, I treasure character interactions at the parks, especially the ones at character meals.

No, I’m not talking about the ones with Mickey & Minnie Mouse, the costumed characters who cannot talk. 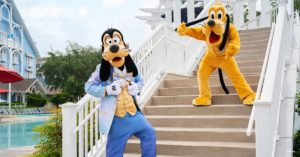 Sure, those are great, especially the Goofy and Grumpy ones.

Still, I’m a more a fan of the stuff that requires quick reactions. I’m talking about the wicked stepsisters, Gaston, and the Fairy Godmother. 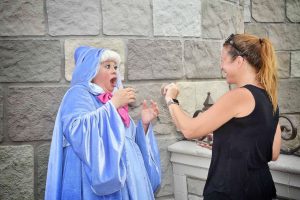 All these cast members must be ready for any kind of question and respond accordingly. I’m always in awe of the ones who pull it off the best.

To wit, I have vivid memories of an especially good Drizella making the whole table laugh with her domineering personality and screeching voice. 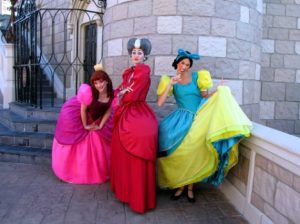 These unscripted and unplanned moments bring so much joy and make a Disney visit personal to me and mine. Nobody else had that thing happen but us!

Dining by the Monorail

A Facebook memory popped up today from four years ago. Frankly, it’s a picture I’ve taken many times over the years, but this one is from 2018. 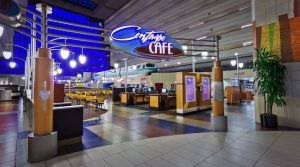 I was dining at one of my favorite Quick Service restaurants, the Contempo Café at Disney’s Contemporary Resort.

The picture had nothing to do with the food, though. Instead, it was a shot of the monorail sitting in place 10 feet above the restaurant’s drink station. 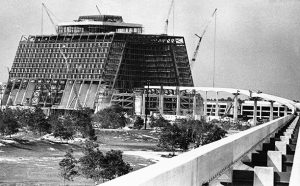 To me, that’s the genius of Disney in its purest form. To appreciate it fully, you must consider everything involved.

First, Disney had to build a hotel resort with a massive hole in the middle. Then, architects had to design a monorail line that could drive through the middle of it. 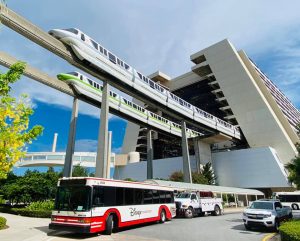 Afterward, someone decided to build restaurants and shops on the concourse level surrounding the monorail station.

Then, guests could dine as monorails whizzed by, something we’ve done for fifty years now. It’s a stunning triumph of human endeavor. So, the desserts are great. 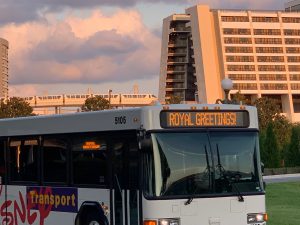 Something I love about Disney is that you don’t need to visit during the holidays to interact with the holiday decorations.

Easter stuff usually goes up a month before the holiday, while Halloween starts in August. As for yuletide joy, it’s more like the 12 weeks of Christmas. 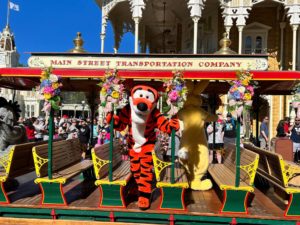 So, you’ll have plenty of time to look at the special touches on display during the holidays.

Personally, my favorite times of the year are Halloween and Christmas. Those are my target dates for holiday visits. 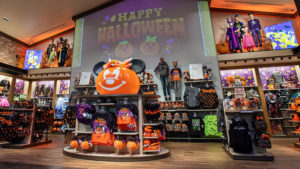 I love all the special events like the parades and after-hours ticketed events.

However, you don’t need to pay anything extra to savor the holidays at Disney. 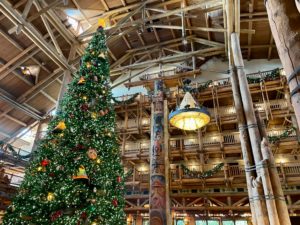 Some of my favorite Disney moments involved interactions with people I’d never met before. 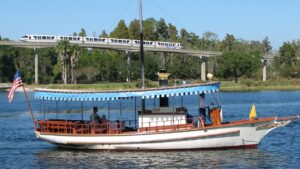 On one memorable day, I overheard a family asking how to take a boat to Disney’s Contemporary Resort.

They were at Disney’s Fort Wilderness Campground and didn’t understand the boat flags.

Coincidentally, they’d read one of my Disney books and trusted me. So, my wife and I led them to the boats and joined them on the ride.

At the Contemporary, we showed them a great spot to watch the nighttime fireworks, which was their end goal. 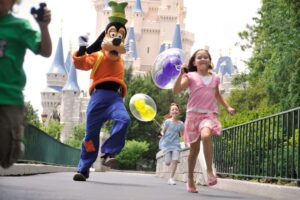 They were delightful people, and it was a lovely hour I spent meeting them.

Little things like this happen often at the parks, especially when you make eye contact and offer a smile to someone you don’t know. 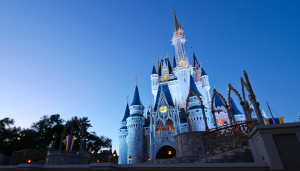 People embrace the social elements of Disney, which makes park visits that much more magical and memorable.

I’m not really a visual person. In fact, I never went through that photography phase that most people do. 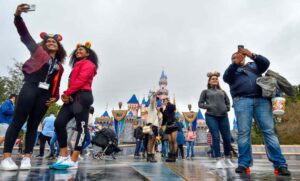 My Instagram account could sue me for abandonment because I really only use it for cat pictures.

At Disney, I’m an entirely different person, and I can even prove this empirically. I just glanced through my phone library. 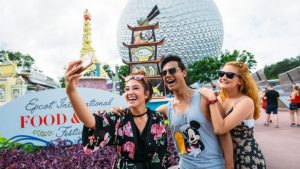 Without exaggeration, 80 percent of the photos in my library come from Disney moments.

Many of them contain my wife, family and friends, and me. However, most stem from visually stunning park sights.

As a Disney history buff, I also tend to go nuts at Walt Disney Presents… as well. 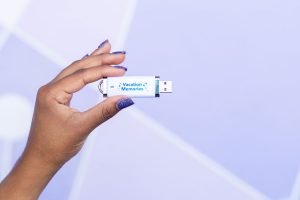 Similarly, we always purchase Memory Maker because we want those images that will last a lifetime.

Many of them adorn our wall, which speaks highly of the skills of the cast members who took them. If you’re reading this, thank you! 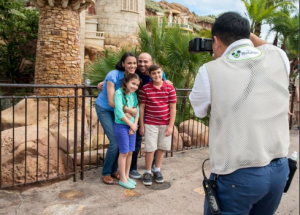 Look, my credit cards get scorch marks when I’m at Disney. I’m a sucker for any shop that sells mouse gear. 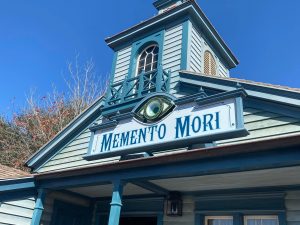 Specifically, when I enter Memento Mori, I relish in this unique tribute to Disney’s Haunted Mansion and its characters.

The items on display here possess a singular focus toward Disney’s most paradoxical attraction. And I especially love anything with Tightrope Girl on it. 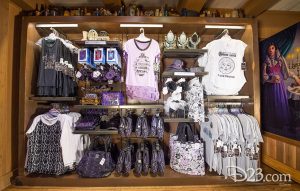 Similarly, when I shop at Mitsukoshi, I’m temporarily leaving Walt Disney World and traveling to Japan.

The pop culture merchandise available here rivals anything else on this planet. Where else can you find Godzilla, Final Fantasy, and Pokemon gear under one roof? 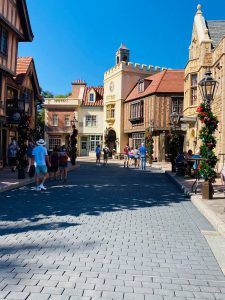 Similarly, I can head to the United Kingdom pavilion and shop for Doctor Who and The Rolling Stones apparel in the same place.

Themed store shopping at Disney is somehow even better than the normal shops!